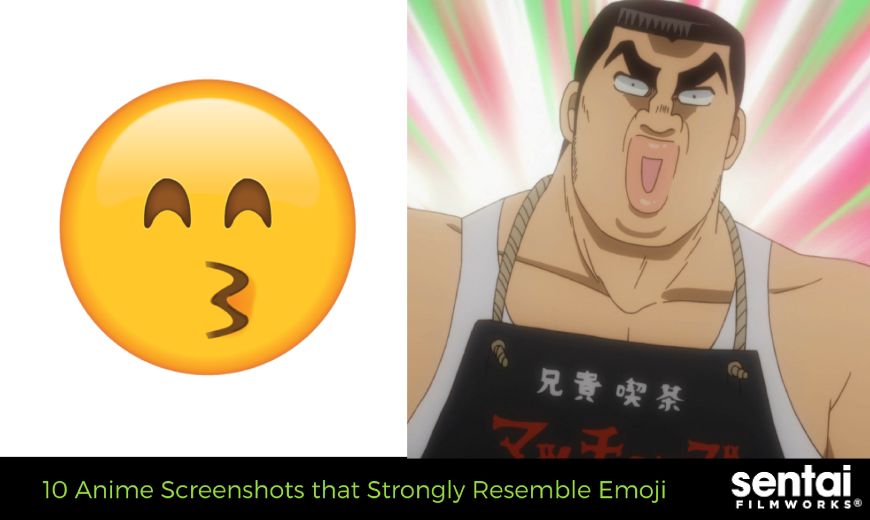 We could probably find 50 or 100 screenshots that strongly resemble emoji verrrry easily… BUT, for the sake of time, let’s go with our top ten! 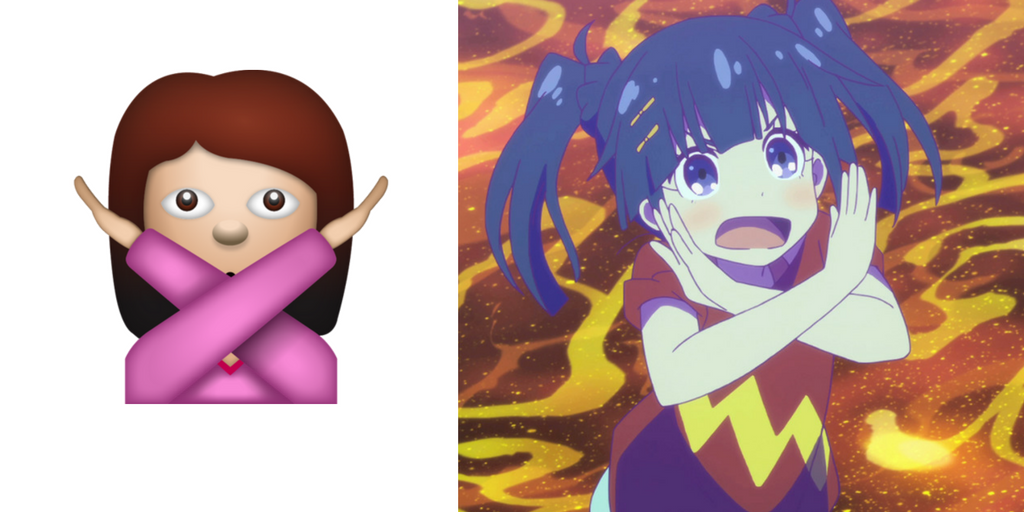 Could this anime screenshot possibly look any closer to the “Woman Saying Nope” emoji? You put your foot down and tell ‘em who’s boss, Yuma-chin! 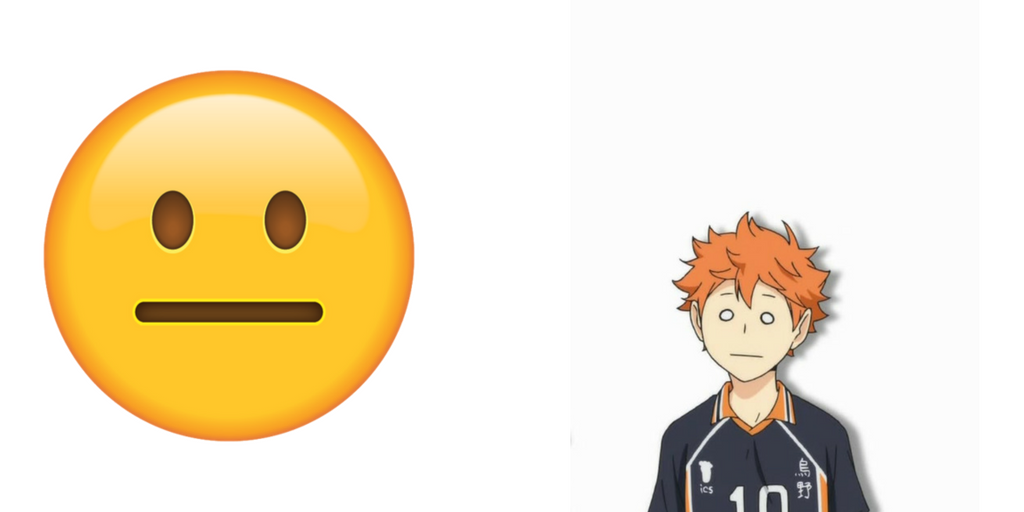 We’ve all had a moment where the only possible response is, “Hm.” Hinata from Haikyu!! can relate. 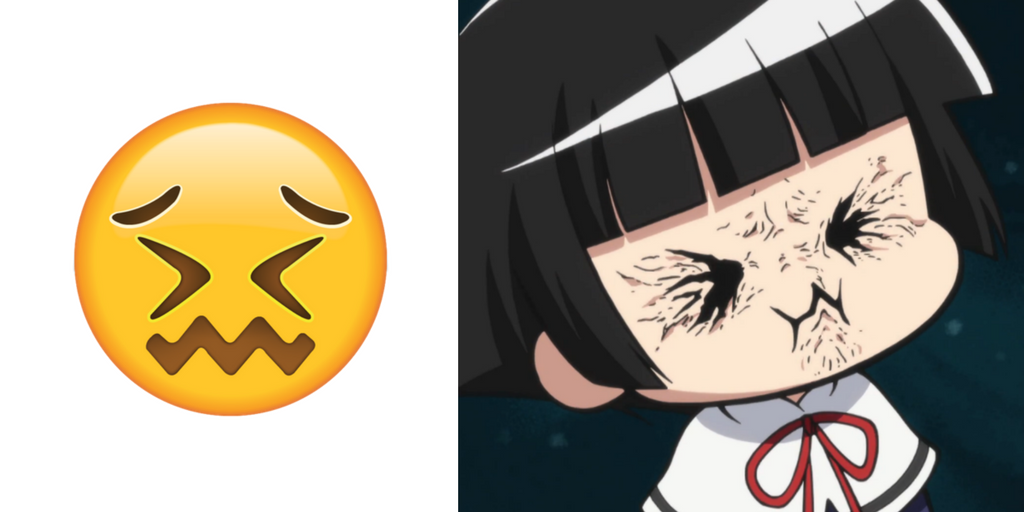 We don’t know what happened to make Kohina squinch her little face up like this, but someone should tell her that dolls shouldn’t look so disgusted. 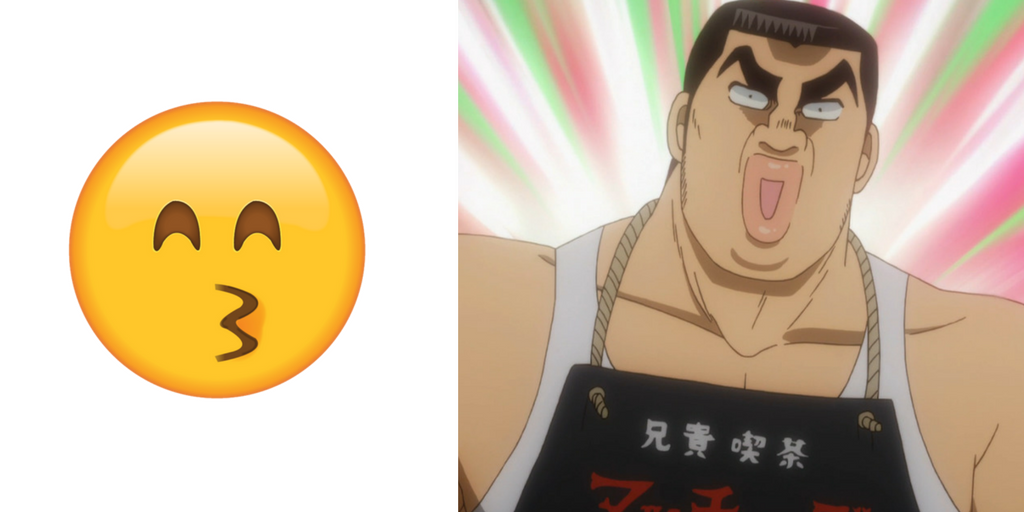 To be fair, most of Takeo’s faces look like emoji. This one might be the most amazing. Can we request an emoji set with ONLY Takeo’s facial expressions? 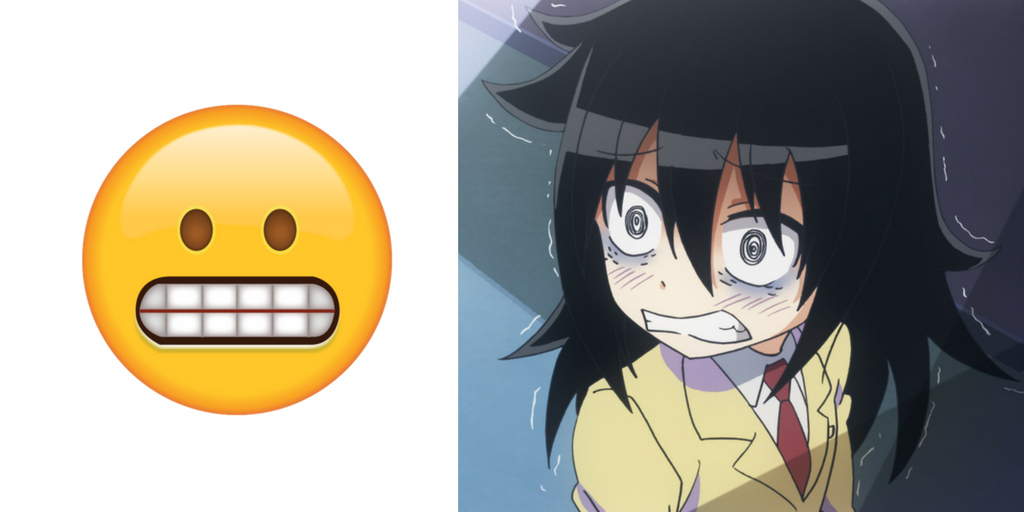 “Grimacing” and “cringeworthy” is the pervasive theme in the anime WataMote. We don’t imagine many people could survive the level of embarrassment Kuroki accidentally puts herself through, but we stand by her and love her for her valiant efforts. 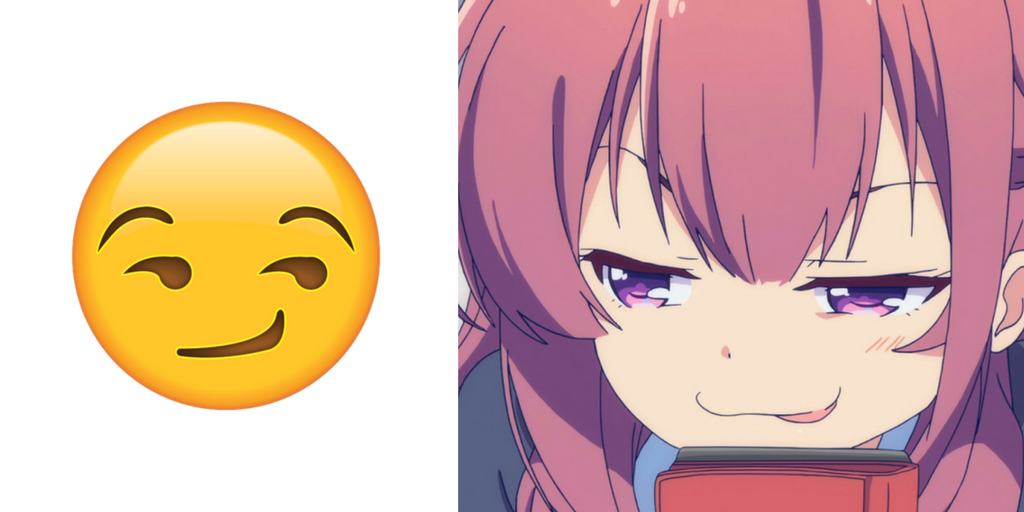 We could probably do an entire blog post filled with nothing but Chitose’s facial expressions during the anime Girlish Number. For the purposes of THIS blog, we couldn’t resist her Chitose-smirk. 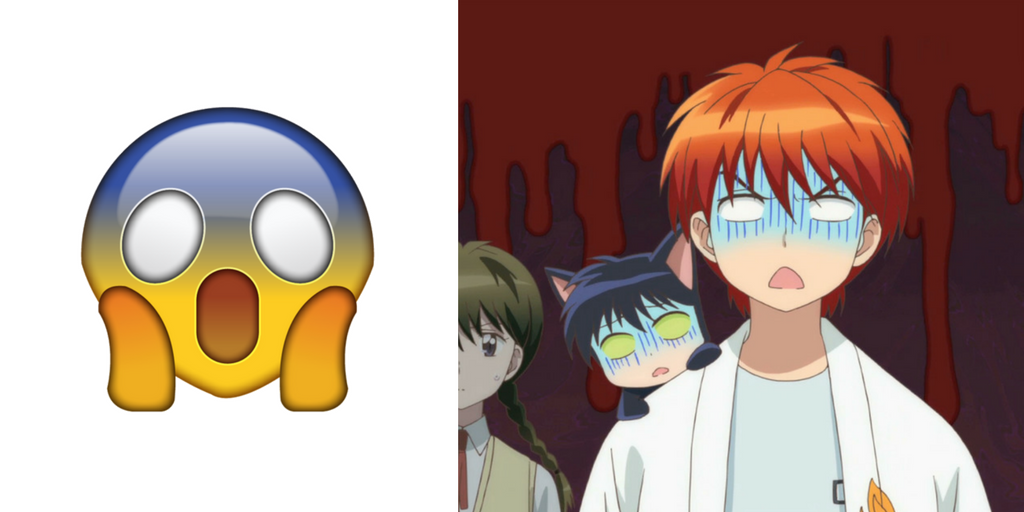 Rinne Rokudo has no shortage of OMG moments in his very chaotic life. In this anime screenshot, he and his sidekick Rokumon are both looking a little aghast. 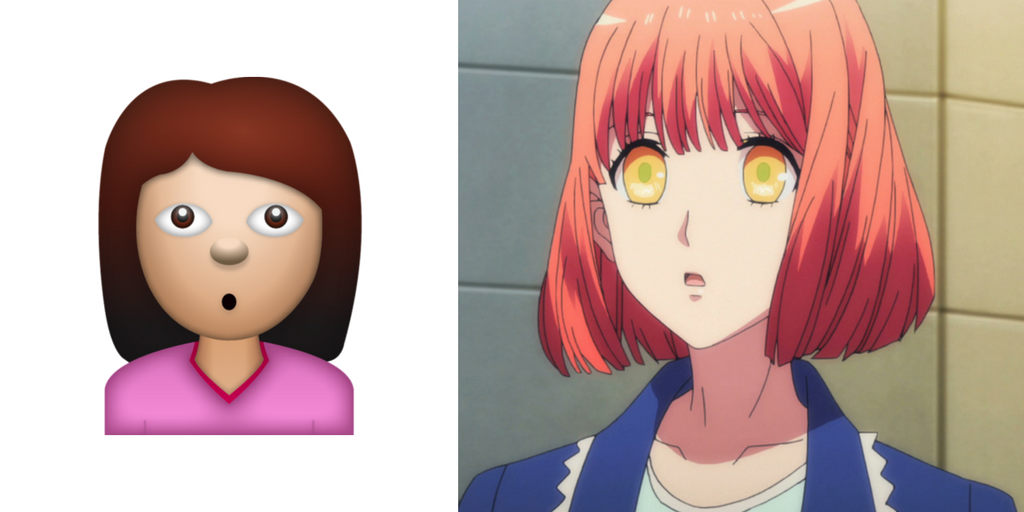 Throughout the Uta no Prince-sama series, Haruka tends to be in awe of her very talented pretty-boys. Looking at the screenshot from the anime below, you can almost hear her (and the emoji) giving a very bewildered, “Oooh!” 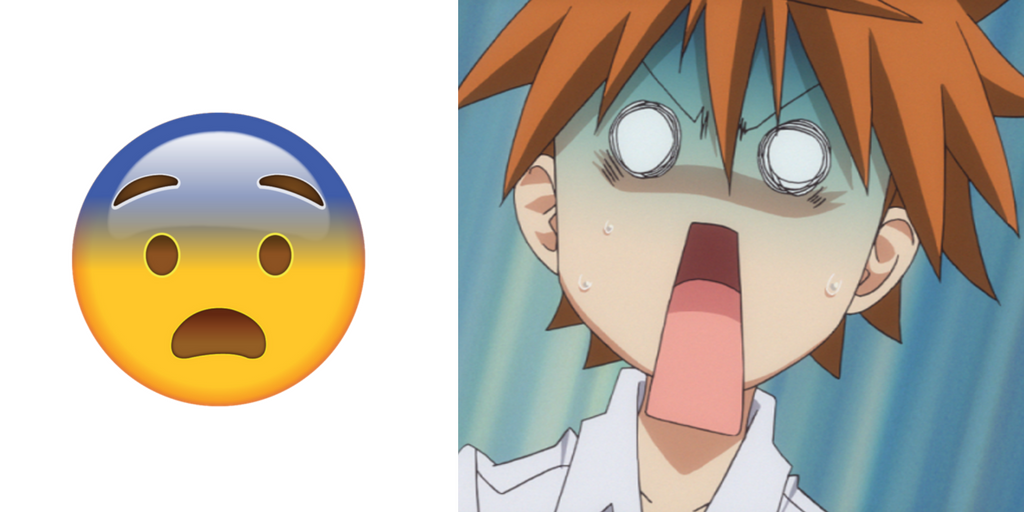 The “Fearful Face” emoji could easily be matched by most harem main characters, but we feel like poor Rito Yuki from the To Love Ru franchise takes the cake. He usually is fearing for his life throughout most of the anime. 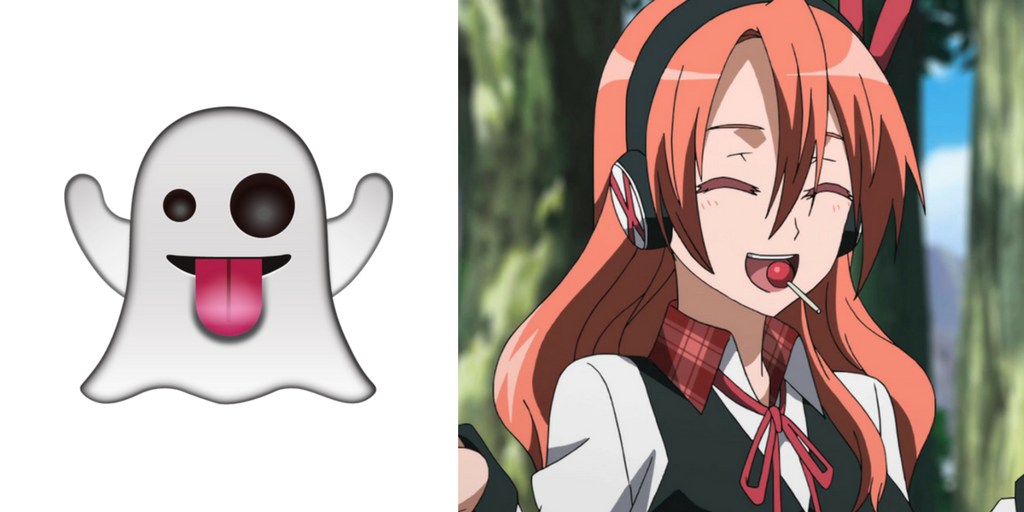 We’re just going to leave this one here without an explanation. If you require clarification, feel free to send us a Facebook message or reach out in the comments. Seriously, though, the similarities in the pose!

Pick Out More Emojis for Us To Play With!

These days, emojis are a part of everyday communication, and, as anime fans, we really can’t help but see the resemblances in some of our favorite titles. What about you? Share your emoji-related revelations with us on Facebook, Twitter, Tumblr, and Instagram.