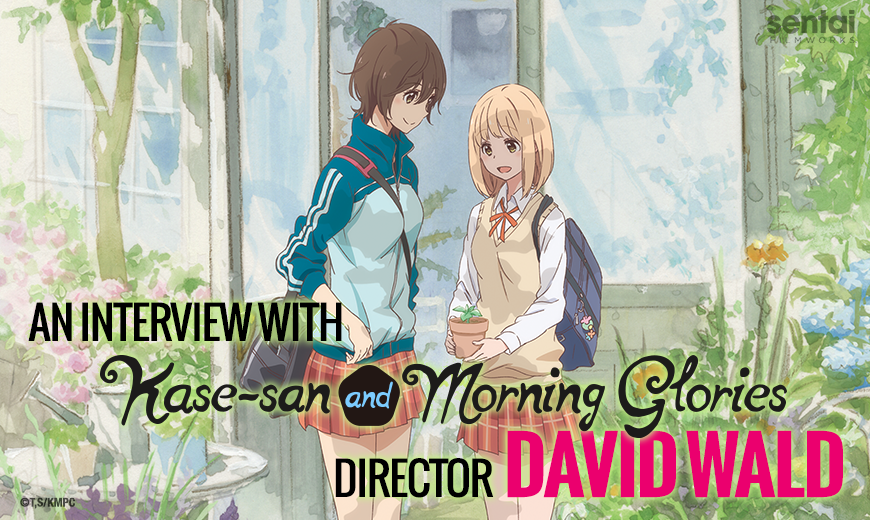 An Interview with “Kase-san and Morning Glories” Director David Wald

To celebrate the upcoming Blu-ray release of Kase-san and Morning Glories, we checked in with the series’ dub director, David Wald, for an interview about the project. In addition to being a prolific (and, frankly, fantastic) voice actor as well as the Kase-san director, Wald has directed multiple Sentai Filmworks English dubs, including LGBTQ+ anime titles like Hitorijime My Hero, Love Stage!! and Bloom Into You.

We could talk at length about the strength of Wald’s work, but you’re not here to hear us gush about his keen insight, gift for dramatic nuance and stellar directorial chops. You’re here to learn more about his work on the Kase-san anime, so without further ado, let’s dive into this interview! 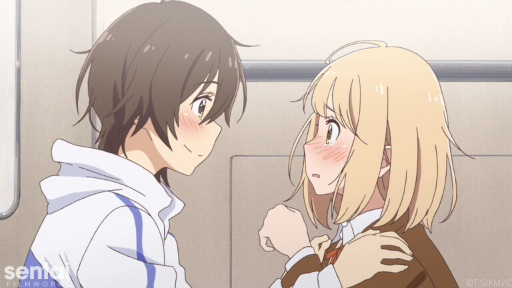 First thing’s first: Let’s talk about the dub! What went into your casting decisions for this series?

What I’m after when I direct, first and foremost, is authenticity. I like more understated and naturalized performances than we usually get in anime. I also like to use actors who share some common elements with their characters. It’s an actor’s job to identify with all sorts of characters, but as an actor myself, I’ve found that if a character is already like me in some small way, it adds depth to my performance. Even the smallest avenue of connectivity between character and actor can give a performance an extra level of sophistication and depth that is difficult to manufacture. In titles which focus on some aspect of the LGBTQ+ experience, I try to use actors who have first-hand knowledge of that experience where I’m able.

The queer coming-of-age is a unique animal. In many important ways, it’s exactly like a traditional coming-of-age. But, on top of the already harrowing experience of any young person coming to know their true self, the queer coming-of-age has an additional aspect: Recognizing your true self in the midst of a vast array of social pressures to deny it. This adds a level of complexity to one’s coming-of-age that is very difficult to communicate to someone who hasn’t experienced it first-hand. It’s for this reason that I try, where I can, to use actors who ascribe to one color or another on the rainbow spectrum for such characters. I’ve found that there’s an extra dimension of resonance from such an actor’s portrayal of a character going through some aspect of the same experience.

Ms. Berry, Ms. Apprill, and Ms. Yu, as well as scriptwriter Marissa Lenti and myself, all have first-hand knowledge of this experience. The colors of the rainbow with which we identify are somewhat different from the characters in Kase-san, but we all understand quite instinctively what coming to terms with oneself outside of traditional societal expectations is like, and I believe this deepens our ability to tell this story. These ladies also all have the benefit of being, in my opinion, absolutely perfect for their respective roles and duties. Arming artists of their caliber with this extra level of shared experience is like giving a Stradivarius to an already world-class violinist. 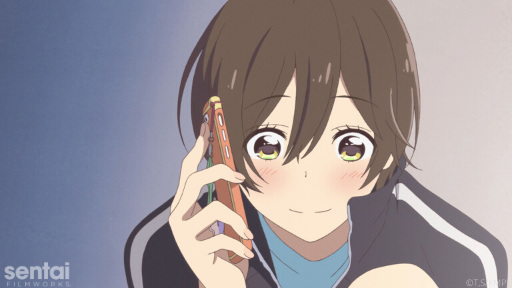 What makes Kase-san unique among the projects you’ve directed?

In most yuri, yaoi, shounen ai, and shoujo ai storytelling, the main characters are primarily concerned with recognizing and accepting their first love for another person of the same gender. We watch as they recognize their capacity for love, come to terms with the fact that it’s a non-traditional love, and encounter various conflicts and obstacles on their way to accepting themselves and finally ending up in the arms of their beloved. I’m a sucker for this kind of storytelling myself, and I doubt that I’ll ever get tired of it.

But in Kase-san, we get a unique view of such a relationship. Kase and Yamada have already navigated that experience at the beginning of the OVA. They’ve already recognized and accepted their love for one another. What we get to see is an established relationship encountering conflict and difficulty. It’s a view of what happens after “happily ever after,” and it’s something we rarely get to see in these genres.

What is your personal favorite thing about the Kase-san OVA?

What I love about Kase-san is the same thing I love about Miles Davis and Harold Pinter: a masterful use of silence. Silence is an incredible tool in storytelling. Silence often finds characters in a deeply personal and authentic moment and gives the audience a chance to absorb and consider the experience without the narrative steering it. In music, Miles Davis considered the silences at least as important as the notes he was playing, and the effect it has on his musical lines is sublime. In playwright Harold Pinter’s work, many of the most important and profound exchanges happen in utter silence, and it lends a kind of tension to his works that few other playwrights have achieved.

Kase-san taps into the power of silence quite beautifully and utilizes this power with style and grace. Like a Miles Davis line or a scene from a Harold Pinter play, the absences of dialogue over languid and beautiful underscoring and the quiet moments of contemplation and reaction are all integral parts of the narrative itself. The most important discoveries and realizations all happen in silence. It gives the entirety of the OVA a sense of holding its breath, and the dramatic tension achieved in those stretches of silence is profound. 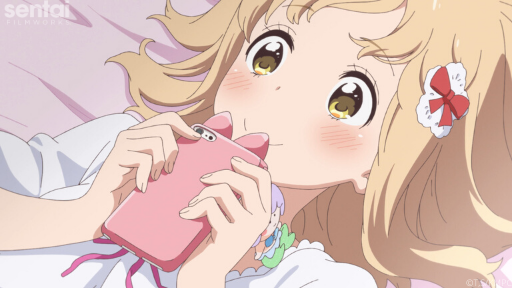 There are many elements that virtually all romance narratives share: an unexpected or unlikely love, followed by various obstacles to its realization, followed by resolution. On top of these, an LGBTQ+ romance usually adds a particular element of its characters operating against societal expectations. An understanding of the romance form itself will inform any kind of romantic storytelling.

But you’re right, girls do operate differently from boys, generally speaking. To address these differences and make sure they’re faithfully depicted, I feel it’s important to have a female scriptwriter. Marissa Lenti penned scripts for both Bloom Into You and Kase-san and Morning Glories. She not only has the benefit of being an excellent scriptwriter, but in these special cases, her work helps ensure that these stories are rendered from an authentic, feminine view.

We absolutely loved the original Japanese dialogue, of course, but what do you think the English dub adds to the experience of watching Kase-san and Morning Glories?

First and foremost, it communicates this breathtaking story to an English-speaking audience in the music of a language they understand intimately. And it does so beautifully.

Scriptwriter Marissa Lenti did careful and elegant work with this adaptation, and her dialogue virtually sings. Ms. Lenti and I have collaborated on other titles including Bloom Into You and Love Stage!!, and one of our highest priorities with titles like these is to tell a story that will speak to any fan of a sweet romance, but will also speak authentically to our fellow members of the LGBTQ+ community while staying true to the heart of its original Japanese iteration.  Viewers of the English dub will also, of course, be treated to utterly outstanding performances by Morgan Berry, Bryn Apprill, and Apphia Yu, among many others. 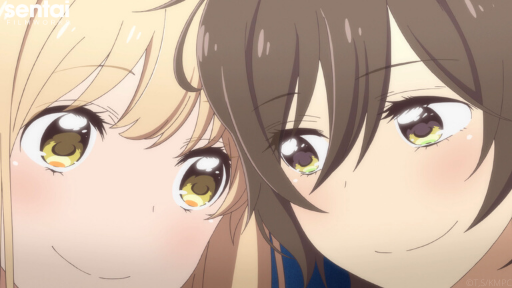 What’s an important takeaway for viewers of this OVA?

Kase-san shows us a beautiful rendering of a “flourishing love” story. The relationship between Kase and Yamada is sweet, harrowing, complex, disarming, frequently charming, and occasionally heartbreaking. It’s an archetypal view of any new love, and I think any viewer could find themselves in it somewhere.

But this love exists between two young women, and the real benefit of telling such a love story is that it is unfettered by the usual parameters which commonly apply to heterosexual couples in romantic storytelling: the male jockeying for balance between his masculinity and his sensitivity; the female tolerating his masculinity while nurturing his sensitivity... these are elements commonly found in a huge portion of romance titles in any medium. But a romance between two women or two men has the potential to show the viewer a different approach to problem-solving in romantic conflict and a slightly different view of the true potential of love. Kase-san and Morning Glories takes full advantage of this potential and delivers a story to which anyone can relate, regardless of gender or sexual preference.

None of us truly understand love. It is part of the Vast Incomprehensible. Kase-san, like all of the very best romances, doesn’t provide us any real answers. But it’s asking the right questions. It gives us a chance to revel in and learn from someone else’s struggle with questions we all have, at one time or another: Why me? Why her? Will she accept me? Am I enough? And the most universally pertinent: How do we make this work?

Need More of the Kase-san Anime? You’re in Luck!

Kase-san and Morning Glories is unique among LGBTQ+ anime for its portrayal of a relationship after its “happily ever after,” and its dub reflects its director’s eye for nuance and authenticity. If you haven’t ordered your copy of the Kase-san anime yet, never fear! You can get a taste of the dub right here:

And if you happen to be in Atlanta, Georgia from October 31, 2019 to November 3, 2019, you can catch Kase-san director David Wald at Anime Weekend Atlanta! On Saturday, November 2, 2019, he’ll be making appearances at two panels. The LGBTQIA Panel takes place in Williams CDF at 1:15 PM, and at 6:30 PM in Williams CDF, Wald will attend a showing of the entire Kase-san OVA followed by an interview with Wald himself.

For more about Kase-san and Morning Glories, David Wald and LGBTQ+ anime, be sure to follow us on social media and sign up for our newsletter!