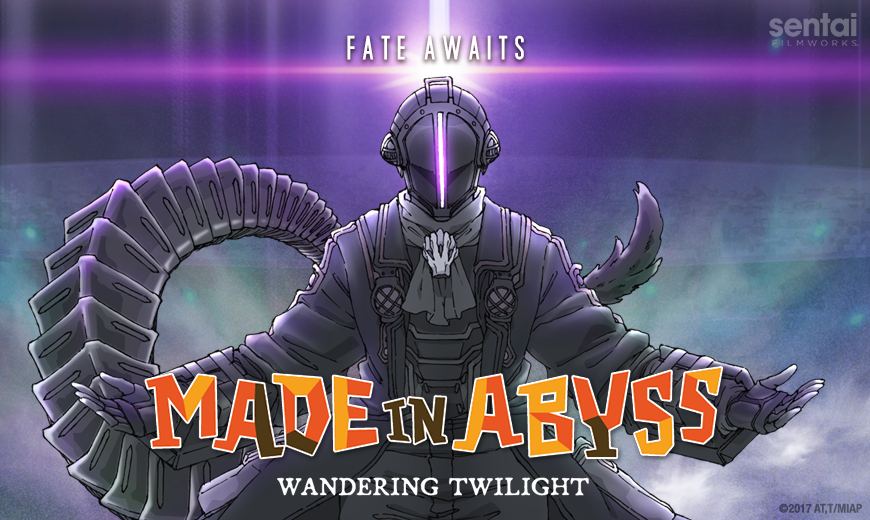 “MADE IN ABYSS: Wandering Twilight” Hits Theatres this Spring 2019

HOUSTON, TX — May 14, 2019 — Sentai Filmworks announced today that MADE IN ABYSS: Wandering Twilight, the gripping follow-up to MADE IN ABYSS: Journey’s Dawn released earlier this year, arrives in select theatres beginning May 27, 2019. The rollout will follow an exclusive red-carpet debut at Anime Central 2019. The film continues the adventures of Riko and Reg as they descend further into the treacherous Abyss, where they encounter vicious monsters, jaw-dropping locales and enigmatic new friends as they search for Riko’s missing mother.

MADE IN ABYSS: Wandering Twilight features exclusive new animation and storytelling not shown in the MADE IN ABYSS anime series or previous MADE IN ABYSS film. Bonus features will also accompany the film, including a behind-the-scenes look at the film’s production as well as interviews with the series’ director, producer and music composer.

Fans can find showtimes, theatre locations and more at www.madeinabyssmovies.com.

MADE IN ABYSS: Wandering Twilight follows Riko and Reg on their adventure through the Abyss, picking up directly after the events of MADE IN ABYSS: Journey’s Dawn. The mystery surrounding her mother’s death deepens as Riko learns more about the truth of her origins. More determined than ever to travel to the bottom of the Abyss, Riko and Reg leave Ozen’s Seeker Camp and delve into the treacherous Third Layer — and beyond, to depths brimming with supernatural creatures, unexpected allies and deadly enemies. Perilous, poignant and spectacular in turns, this continuation of Riko and Reg’s journey is sure to leave fans of MADE IN ABYSS absolutely spellbound.