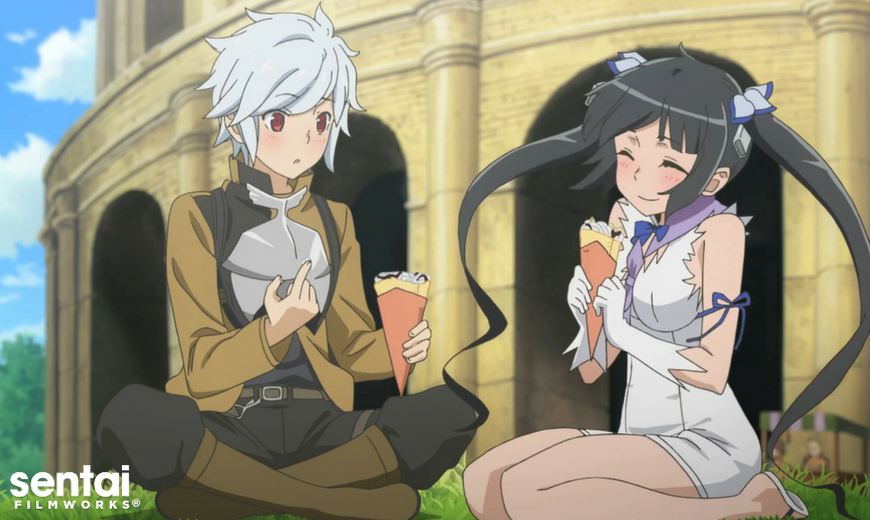 #TheDubsAreComing continues with the much-anticipated release of Is it Wrong to Try to Pick Up Girls in a Dungeon? For the record, NO IT’S NOT WRONG, and it will feel so right when you add it to your collection. Even better news? DanMachi will be available as a Collector’s Edition Premium Box Set.

Also, you might want to scroll down to the very end to see everything we have happening in March because it’s a packed month.

Which titles are you excited to take home?

Title: IS IT WRONG TO PICK UP GIRLS IN A DUNGEON? COMPLETE COLLECTION

SYNOPSIS:  Some adventurers delve into the sprawling labyrinths beneath the city of Orario to find fame and fortune. Others come to test their skills against the legions of monsters lurking in the darkness below. However, Bell Cranel's grandfather told him a different reason: it's a great place to rescue (and subsequently meet) girls! Now that Bell's a dungeon delver himself, the ladies he's encountering aren't the helpless damsels in distress he'd imagined, and one of them, the beautiful swordswoman Ais Wallenstein, keeps rescuing Bell instead. As embarrassing as that is, it's nothing compared to what happens when goddesses get involved. Freya, Hephaistos, and Loki, with their powerful Familias, are intimidating enough, but there's one goddess whose relationship with Bell is certain to spark trouble. After all, Bell is the ONLY member of the goddess Hestia's Familia, and she's not sure if she wants to share him with anyone in IS IT WRONG TO TRY TO PICK UP GIRLS IN A DUNGEON?

SYNOPSIS:  Phantasy Star Online 2 is the most popular game on the web, and almost everyone at Seiga Academy is deeply immersed in it. When the school administration begins to worry that the game is causing more harm than good, student council president Rina Izumi sets out to prove PSO2's virtual positives.  To confirm her opinion, she recruits Itsuki Tachibana, one of the few students who isn't already hooked, and instructs him to learn how to play so she can study the effects. What at first seems like a brilliant and simple plan instead lifts the lid off a Pandora’s Box filled with unexpected complications. As Itsuki's life undergoes a rapid transformation, it soon becomes clear that PSO2 may be much more than merely a game!  In fact, a whole new world waits on the other side of the net in PHANTASY STAR ONLINE 2 - THE ANIMATION!

SYNOPSIS:  The five members of the Student Cultural Society have spent a lot of time wondering what it would be like to be in someone else's shoes, but they're about to get in touch with each others' feelings in the most unexpected way: a five-way body swap! What happens when five teens suddenly find themselves inside the body of the girl (or boy) next door? Aside from suddenly making trips to the bathroom VERY uncomfortable, it also brings a whole new meaning to the term "Exchange Student"! If THAT wasn't enough of a problem, the emotional trauma literally gets multiplied when a new affliction strikes, causing peoples' innermost feelings to suddenly transfer from person to person! Get ready for a trip through the emotional wringer as three girls and two boys see the world through each others' eyes in KOKORO CONNECT - The Complete Collection!

SYNOPSIS:  “A piece of spaghetti or a military unit, George S. Patton famously said, "can only be led from the front end." However, once the heat of battle has cooled and the fog of war turns as thick as minestrone, determining which end was front and who pulled on what can be difficult. Therefore, for the enthusiasts who've puzzled over the epic tank battle between the girls of Ooarai Girls' Academy and their Italian-themed rivals from Anzio High School, we present these classified videos for your eyes-only! Miho and Team Oorai will have their hands full with the impulsive attacks of Vice-Commander Pepperoni and facing the raw fury of Vice-Commander Carpaccio… but the real question is whether they can hold off Anchovy's ultra-secret secret weapons! Will they persevere? Or will their opponents end up saying "tank" you very much… for the victory in GIRLS UND PANZER: THE REAL ANZIO BATTLE!

SYNOPSIS:  As the sole human living alone with six handsome vampires, beautiful young Yui Komori is slowly becoming used to being the constant focus of all of their attentions, both amorous and otherwise. However, if she was feeling pale and weak before, her ordeal is about to become even more emotionally draining as four new vampire brothers appear with the intention of making Yui their own permanent dinner guest. Who are the Mukami brothers, and why are they so dead set on keeping Yui for themselves? Why do they keep referring to her as "Eve" and whose master plan are they following? How will the original six Sakamaki brothers react to having Yui stolen out of their clutches? Four more vampires join the table and Yui's the second course in DIABOLIK LOVERS II: MORE, BLOOD!