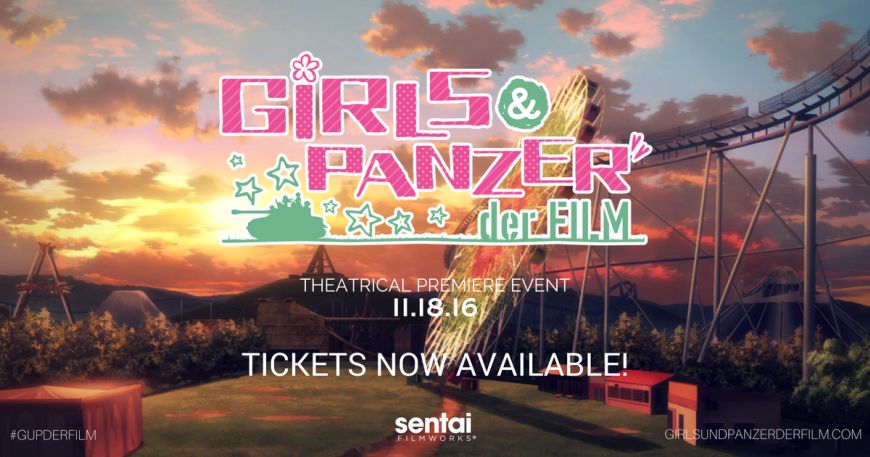 “The demand for a U.S. theatrical release of Girls und Panzer der Film was loud and clear,” said John Ledford, President and CEO of Sentai Filmworks. “We are thrilled to bring this intensely epic franchise to big screen audiences, where they can experience its unique blend of humor, heroism, and girls rocking heavy artillery.”

Girls und Panzer der Film picks up where the successful television series, Girls und Panzer, left off: in a society where humanity exists in cities built atop gigantic carrier ships. Now the girls of the Ooarai High School tankery team must pull together to defeat their foes and save their beloved school.

The movie, released in 2015 in Japan, was ranked the highest-grossing movie of its opening weekend and earned more than $24 million (USD) total at the Japanese box office. The film won the prestigious Seiun Award Best Dramatic Presentation and the Sanctuary Award from the 25th Japan Movie Critics Award. The English-dubbed movie is directed by Kyle Colby Jones, whose credits include No Game No Life, Parasyte –the maxim-, Akame ga Kill!, and Monthly Girls' Nozaki-kun. Additionally, Margaret McDonald (Miho), Rebekah Stevens (Yukari), Jessica Calvello (Saori), Caitlynn French (Hana), and Molly Searcy (Mako) reprise their roles from the TV series.

“We believe in connecting exceptional and distinguished films to audiences around the world, and we think anime fans will thoroughly enjoy Girls und Panzer der Film,” said Ko Mori, CEO and President of ELEVEN ARTS.

Girls und Panzer der Film premieres during a special launch event at San Francisco’s NEW PEOPLE CINEMA in Japantown on Friday, November 18, 2016, at 7:00 pm. The 143-seat theater is located in
NEW PEOPLE (1746 Post Street), a 20,000-square foot entertainment complex that promotes the latest in Japanese popular culture expressed though film, art, fashion, and various events. In addition to the movie, attendees will receive exclusive swag, participate in a Q&A panel with key film staff, and more.

All screening information can be found on www.girlsundpanzerderfilm.com with listings updated as additional theaters are added. For more information, including the movie trailer and cast and credits, please visit: