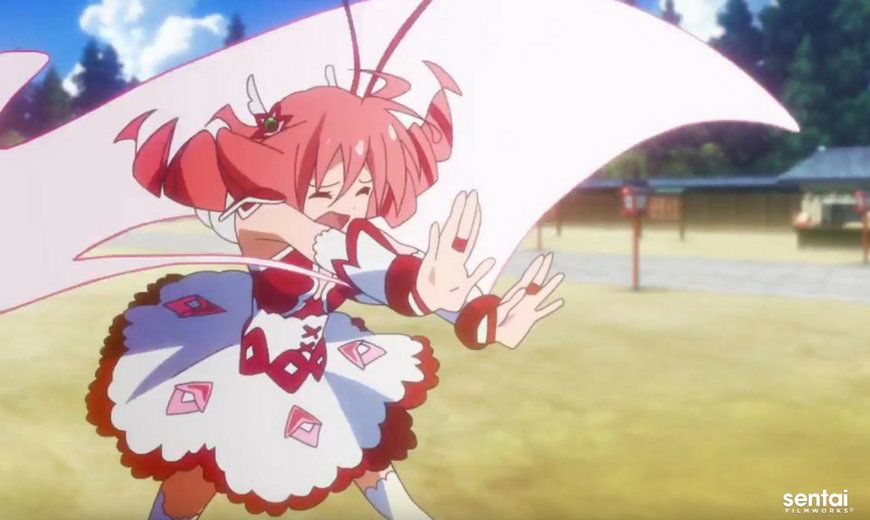 I have wielded a god.

The year 2016 -- In Tenman Shrine in Kamagaya City, Matoi Sumeragi was a 2nd year middle school student working a part-time job as a shrine maiden. Separated at a very young age with her mother, she has been entrusted for a long time with her paternal grandparents, and three months ago she finally started living together with her father Shingo. Because of such conditions, Matoi had been looking up to an ordinary, calm lifestyle.

Matoi's close friend and coworker Yuma Kusanagi was the candidate for the next shrine maiden, being born into the family of the Tenman Shrine's shrinemaster. She finds out that the family has conducted "exorcism" to rid evil spirits for generations, and attempts the "ritual of divine possession", a ritual connected to "exorcism", together with Matoi.

After school, the two of them head to the shrine as usual, but there they find a devastated shrine and Yuma's parents wounded and collapsed. Furthermore, there was a man there with somewhat of an aura of insanity, who was a suspect for a mysterious case that Shingo, who is a detective, was trying to crack. Yuma suddenly conducts a "ritual of divine possession" in order to hold the thrashing man back, but it wasn't Yuma that changes happened to…

What was given a girl who was seeking an ordinary, normal life was the power to wield a god and rid evil spirits!? Matoi Sumeragi will earnestly work at exorcist activities in order to regain those calm days where nothing gets in her way!

The series was directed by Masayuki Sakoi (Strawberry Panic!, Princess Resurrection) with series organization and script by Yosuke Kuroda (High School of the Dead, Trigun, My Hero Academia).

Matoi the Sacred Slayer is scheduled for an October 4, 2016 broadcast in Japan. It will soon be available on select digital outlets with a home video release to follow.