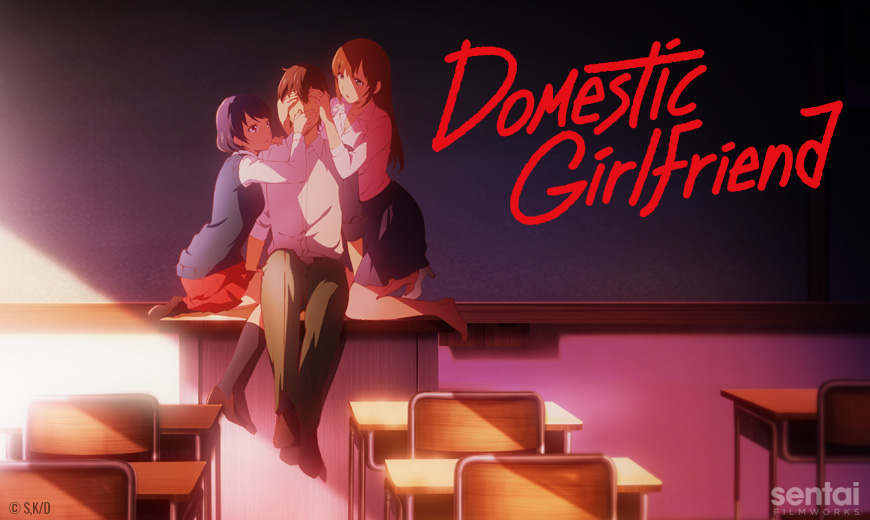 HOUSTON, TX, January 5, 2019 – Sentai Filmworks announced today that it acquired distribution rights to the Domestic Girlfriend anime series, based off the popular manga of the same name, for audiences in the United States, Canada, the United Kingdom, Ireland, Australia, New Zealand, South Africa and other select territories.

Natsuo is a high school boy who is experiencing the crushing despair of unrequited love. To make matters worse, the person he is in love with is his teacher, Hina. In an attempt to lift his spirits, he attends a mixer where he meets a girl named Rui. The two sleep together, expecting never to see one another again, but fate has other plans. His life suddenly becomes more complicated when his father comes home and announces he has remarried a woman with two daughters whom Natsuo has met before: Hina and Rui!

diomedea (My Girlfriend is Shobitch, Problem children are coming from another world, aren't they?) will be in charge of animation production. Shouta Ibata (Girlish Number) will direct the series with Tatsuya Takahashi (And you thought there is never a girl online?, THE IDOLM@STER CINDERELLA GIRLS) leading series composition. The series will star Maaya Uchida (Love, Chunibyo & Other Delusions!, Gatchaman Crowds) as Rui Tachibana, Yoko Hikasa (High School DxD, No Game, No Life) as Hina Tachibana and Taku Yashiro (The Lost Village) as Natsuo Fujii.