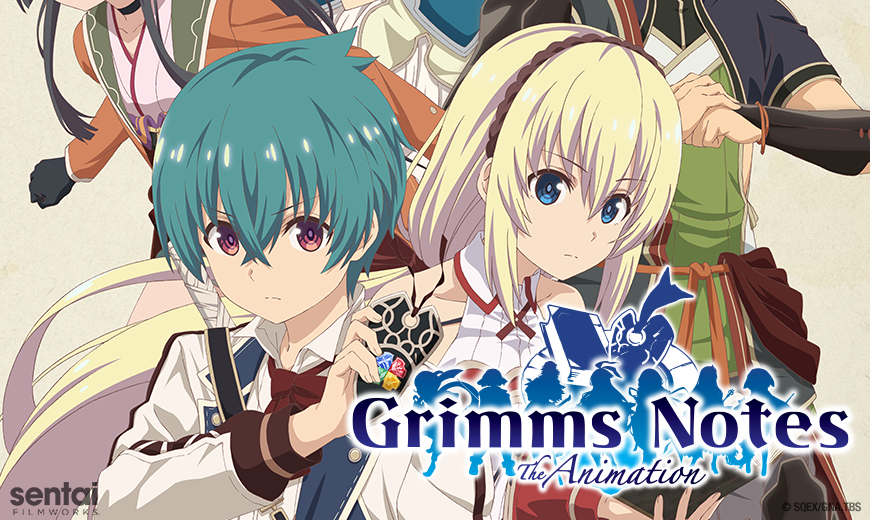 Sentai Filmworks Tells the Story of “Grimms Notes the Animation”

In this mysterious world, everyone is granted a Book of Fate. These powerful books chronicle everything that is and will be about a person’s life. But the sinister Chaos Tellers are rewriting people’s destinies to include catastrophic events. The only ones who can stand against them are a select few who possess blank books of fate.

The series stars Miyu Kubota (Black Clover, Dropkick on My Devil!) as Shane, Reina Ueda (Bakuon!!, Real Girl) as Reina, Ryota Osaka (Knights of Sidonia, Log Horizon) as Exand Takuya Eguchi (The Ambition of Oda Nobuna, Hamatora) as Tao. The series will be directed by Shizutaka Sugahara (RIN-NE, RIN-NE 2) with Hiroshi Yamaguchi (Gingitsune, To Heart) in charge of series composition. Kentarou Matsumoto, whose works include D-Frag! and RIN-NE, is the character designer.

About Sentai Filmworks, LLC
Sentai Filmworks is a leading global supplier of anime and official anime merchandise, distributing, and curating one of the industry’s most diverse libraries of top trending and classic titles. Offering thousands of hours of content across both traditional and digital platforms, Sentai is dedicated to bringing captivating stories and iconic characters directly from Japan. With hit series that include MADE IN ABYSS, Land of the Lustrous, MONSTER MUSUME Everyday Life with Monster Girls, and Parasyte -the maxim-, Sentai’s catalog continues to grow with new favorites like Bloom Into You, Revue Starlight and DEVILS’ LINE, as well as classic anime series such as Legend of the Galactic Heroes and The Big O. For more information, visit www.sentaifilmworks.com.