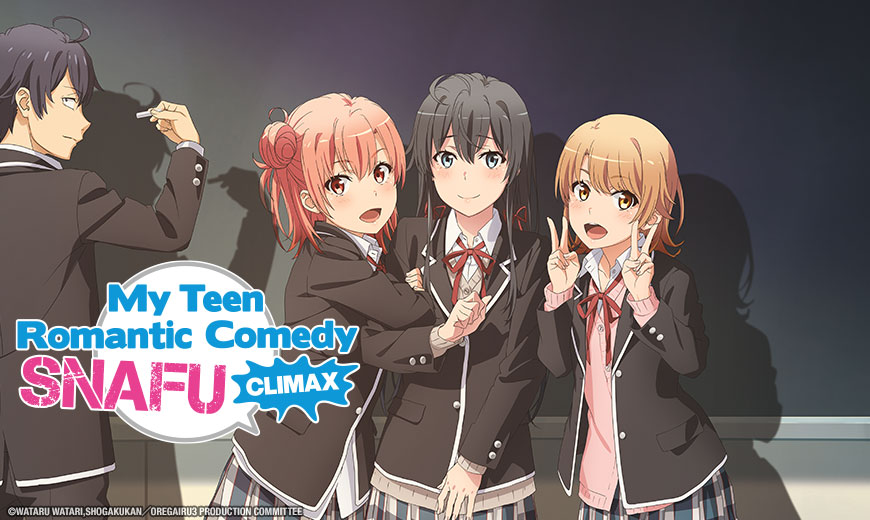 Sentai Snaps Up Season 3 of “My Teen Romantic Comedy SNAFU”

Based upon the light novels of Wataru Watari, My Teen Romantic Comedy SNAFU returns with the series’ long-awaited conclusion and resolution to the nail-biting cliffhanger ending of season 2! But the messy emotions of Hachiman, Yukino and Yui won’t be easily expressed, and as the members of the Service Club band together to host a school prom, they will have to put their feelings into words and truly learn to understand each other at long last… if the Service Club can even stay afloat, that is!

The series is produced by studio feel. (My Teen Romantic Comedy SNAFU TOO!, Mayo Chiki!). Kei Oikawa (Outbreak Company, This Art Club Has a Problem!) returns to direct while Yuichi Tanaka (A Certain Scientific Railgun, A Certain Magical Index) returns as character designer. The series’ opening theme is performed by Nagi Yanagi (Waiting in the Summer, The Fruit of Grisaia) while the ending theme is performed by seiyuus Saori Hayami (MM!, Tower of God) and Nao Toyama (GATE, Rascal Does Not Dream of Bunny Girl Senpai), who play Yukino Yukinoshita and Yui Yuigahama, respectively. The series also stars Takuya Eguchi (My Love Story!!, Love Stage!!) as Hachiman Hikigaya and Ayane Sakura (Beyond the Boundary, Non Non Biyori) as Iroha Isshiki.

My Teen Romantic Comedy SNAFU Climax will be available to stream Spring 2020 with a home video release to follow.