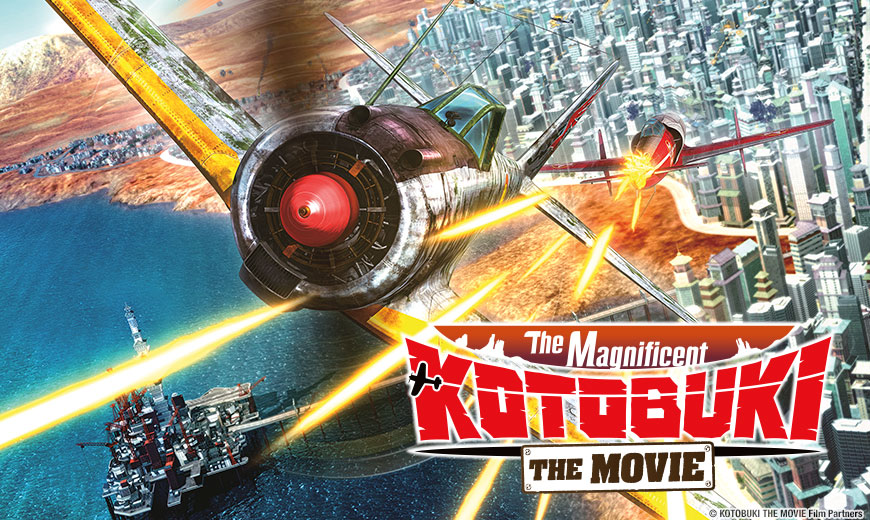 Sentai Soars with “The Magnificent KOTOBUKI THE MOVIE”

HOUSTON, TX — May 24, 2021 — Sentai announced today that it acquired omnibus movie The Magnificent KOTOBUKI THE MOVIE, which sends the high-flying aerial action of The Magnificent KOTOBUKI to new heights. Sentai will distribute the film to audiences in the Unites States, Canada, the United Kingdom, Ireland, Australia, New Zealand, the Netherlands, Denmark, Norway, Sweden, Spain, Portugal, Central America and South America.

In a desolate desert world, air pirates rule the skies. They prey on aerial commerce and hold remote towns for ransom, but the talented pilots of Team KOTOBUKI use their impressive aerial instincts and hard-won skills to defend cities and cargo shipments from these vultures… for the right price, of course. In their existent reciprocating engine aircraft and with ice in their veins, Team KOTOBUKI will take on any enemy that comes their way in an explosive frenzy of aerial dogfights, including never-before-seen new fights unique to The Magnificent KOTOBUKI THE MOVIE.

The film stars Sayumi Suzushiro (Bloom into You, We Never Learn) as Kylie, Eri Yukimura (A Certain Magical Index Ⅲ) as Emma, Sayaka Nakaya (AKB0048, Momokuri) as Kate, Asami Seto (Chihayafuru, Food Wars!) as Reona, Hibiku Yamamura (Arata The Legend, DOREIKU: The Animation) as Zara and Miyu Tomita (MADE IN ABYSS, Holmes of Kyoto) as Chika.

Sentai will release The Magnificent KOTOBUKI THE MOVIE on home video in Summer 2021.