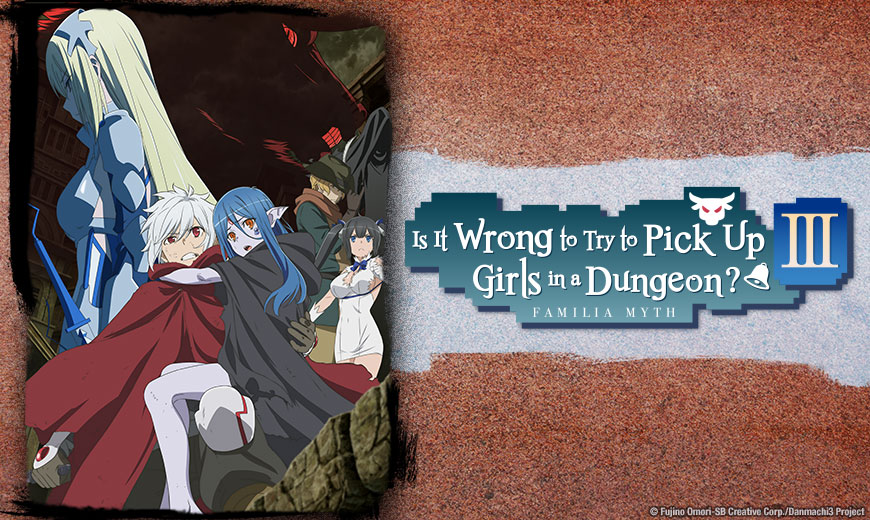 Sentai Summons Third Season of Hit Series “Is it Wrong to Try to Pick Up Girls in a Dungeon?”

HOUSTON, TX — August 26, 2020 — Sentai announced today that it acquired the third season of the wildly popular, always irreverent fantasy adventure series Is it Wrong to Try to Pick Up Girls in a Dungeon?, aka DanMachi. Sentai broke the news of their latest acquisition during their digital anime industry panel, Sentai at Home.

Is It Wrong to Try to Pick Up Girls in a Dungeon? III is slated to stream on select digital outlets in October 2020, with a home video release to follow. Sentai and its content partners will deliver the series for audiences in North America, the United Kingdom, Ireland, Australia, New Zealand, South Africa, the Netherlands, Scandinavia, Turkey, Middle East and Latin America.

Among other returning favorites, the series stars Yoshitsugu Matsuoka (Akame ga Kill!, DEVILS' LINE, Demon Slayer) as Bell Cranel and Inori Minase (Girls’ Last Tour, Love Lab, Tada Never Falls in Love) as the goddess Hestia. The series also stars Rina Hidaka (GATE, MADE IN ABYSS, Black Bullet) as Wiene, a mysterious newcomer whose presence expands and challenges the broader mythos and immersive fantasy universe of Is it Wrong to Try to Pick Up Girls in a Dungeon?