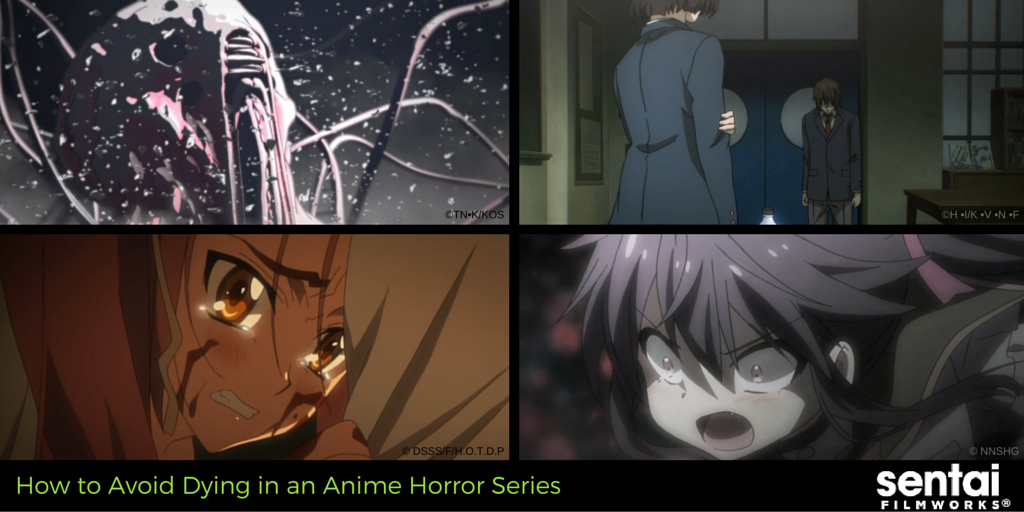 How to Avoid Dying in an Anime Horror Series

Halloween season is upon us in full force, and the death tolls are as high as always in our favorite anime horror series. Can you imagine how much better these characters would fair if only they knew the basic rules of surviving in a horror anime?

What if YOU suddenly found yourself trapped in a horror anime series? For those of you who are fond of NOT dying, enjoy these tips. 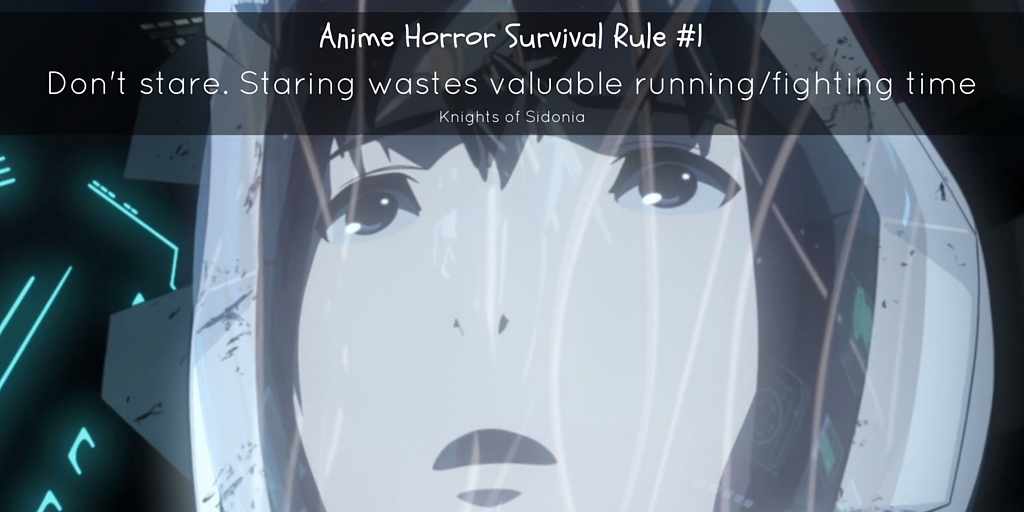 Whether you’re fighting merciless aliens in space, or running into your first zombie, don’t stand there and stare. If you want to survive, take your pick: run or fight. 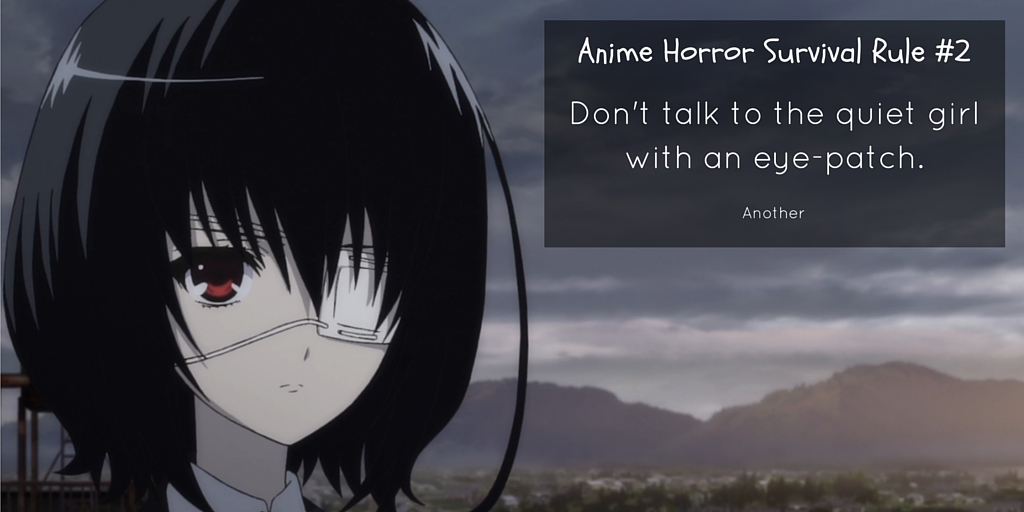 She’s pretty, quiet, and everything about her body language is telling you to stay away. Silent eye patched beauties appear in a few anime horror titles, and associating with them usually results in death. Play it safe. 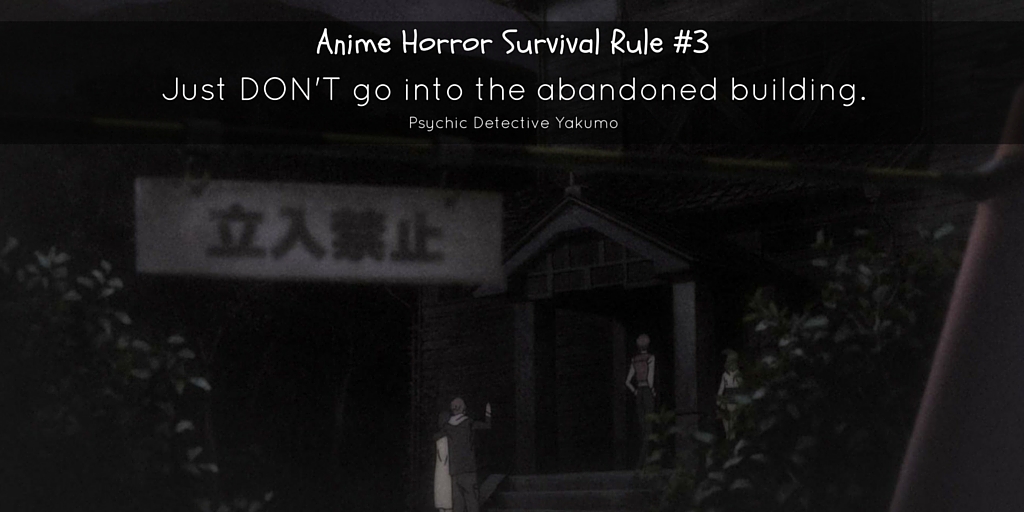 If your friends disappear or mysteriously die after a poorly planned trip to an abandoned old school building, don’t go in there yourself. Simple cause and effect states that you will end up suffering the same fate if you are not the main character. 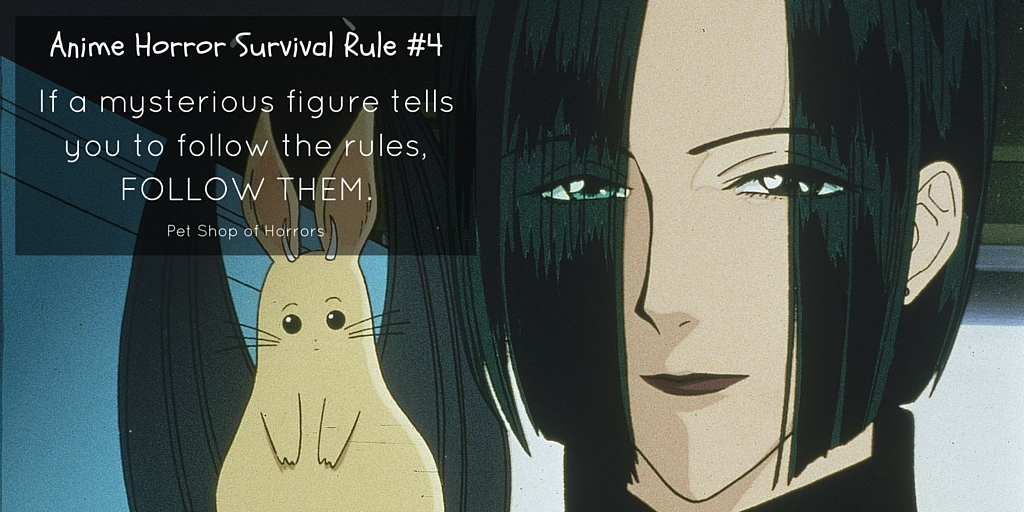 As a general rule, you should listen when an enigmatic authority figure gives you specific rules to follow concerning a mysterious transaction. 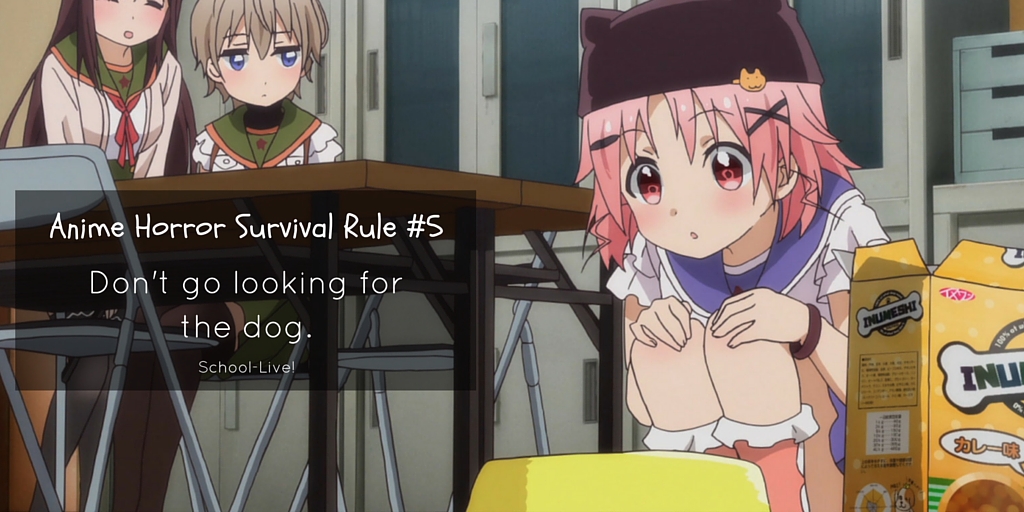 Pets can (usually) take care of themselves. In a life or death situation, running off into the Great Unknown will usually get you killed. 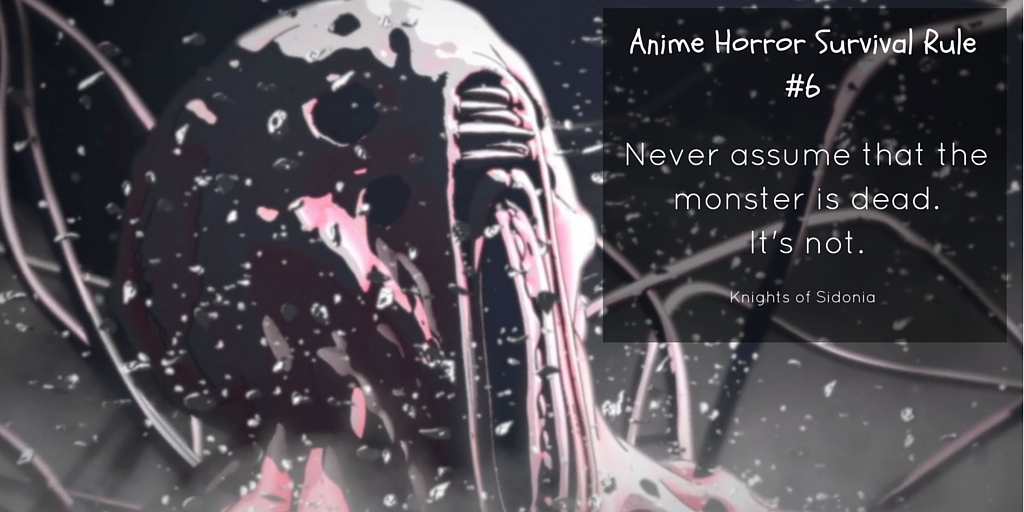 Just because you drove the weapon into the monster (or gauna’s) body doesn’t mean it’s dead-dead. ALWAYS CHECK THE BODY. Empty your bullets into the corpse. Cut the head off. Do whatever it takes to ensure that the monster is permanently dead. Anime monsters tend to be harder to kill than their Western counterparts. 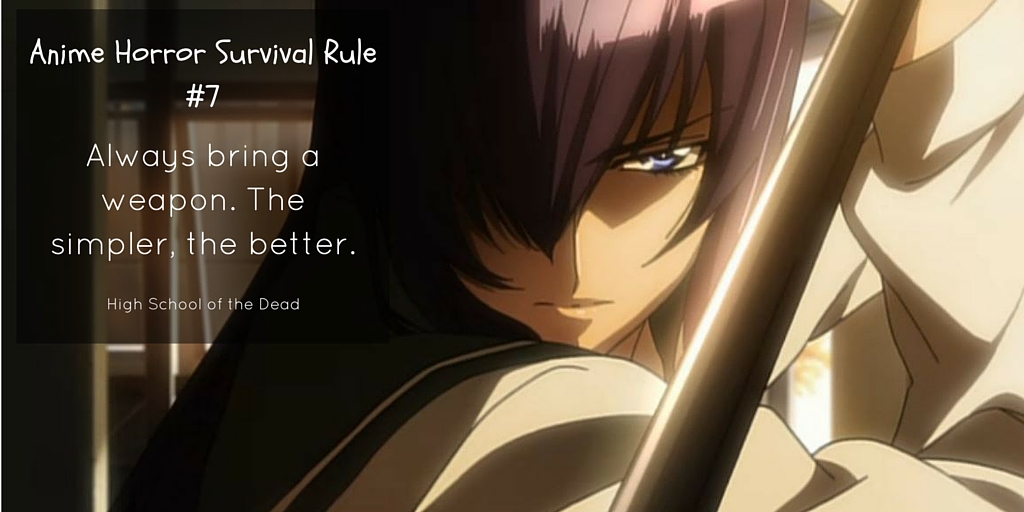 Anime characters tend to be lucky enough to know SOMEONE with a katana. A sword is much more reliable than a gun. When dealing with anime horror, especially visceral monsters like zombies, simple weapons work best. More importantly: always keep said weapon on your person. 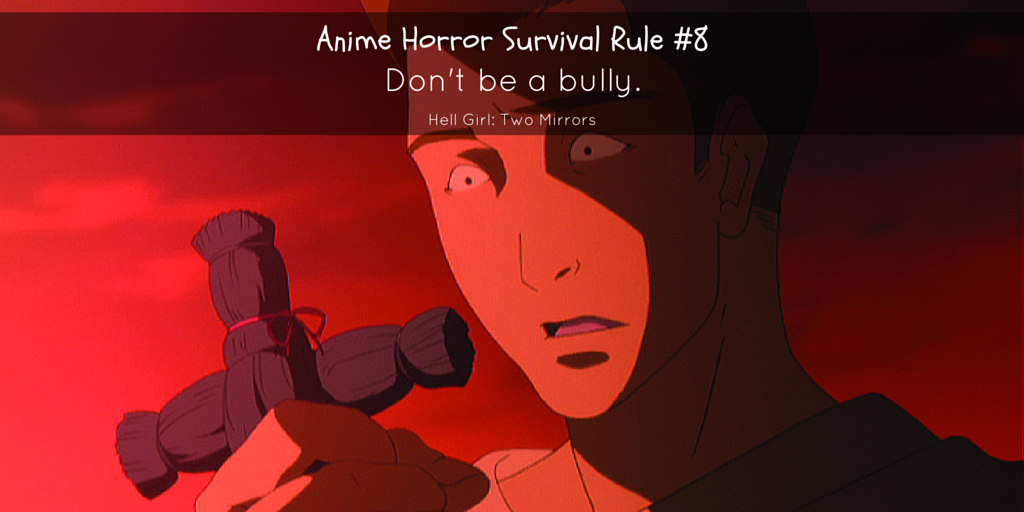 Be a nice person. Everyone is fighting their own personal battle, and if they hate you enough, they have the option of cursing you. For all you know, you are one ribbon way from having your soul taken straight to Hell. 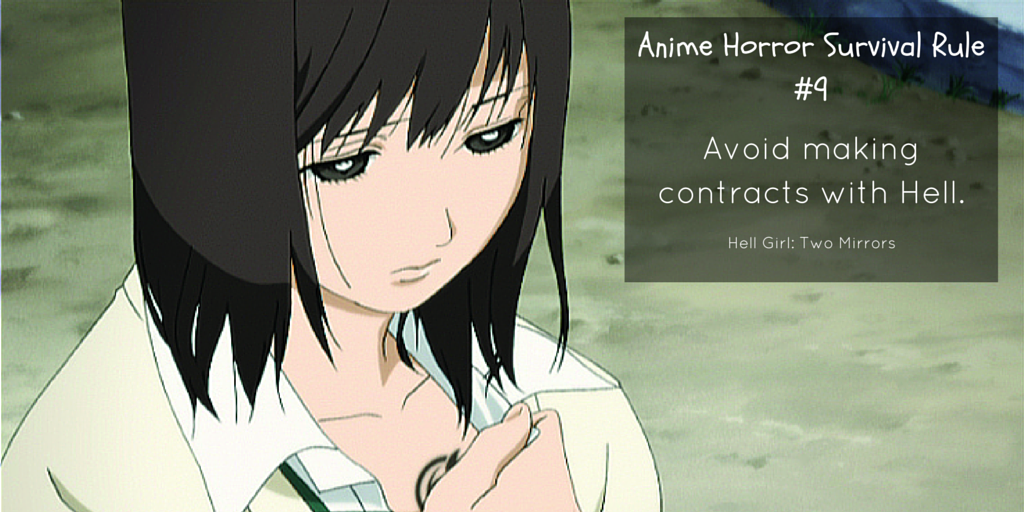 To follow up on the previous rule, don’t make contracts with Hell. What goes around, comes back around, and you’ll eventually end up reaping what you sow. All is NOT fair in love and revenge. 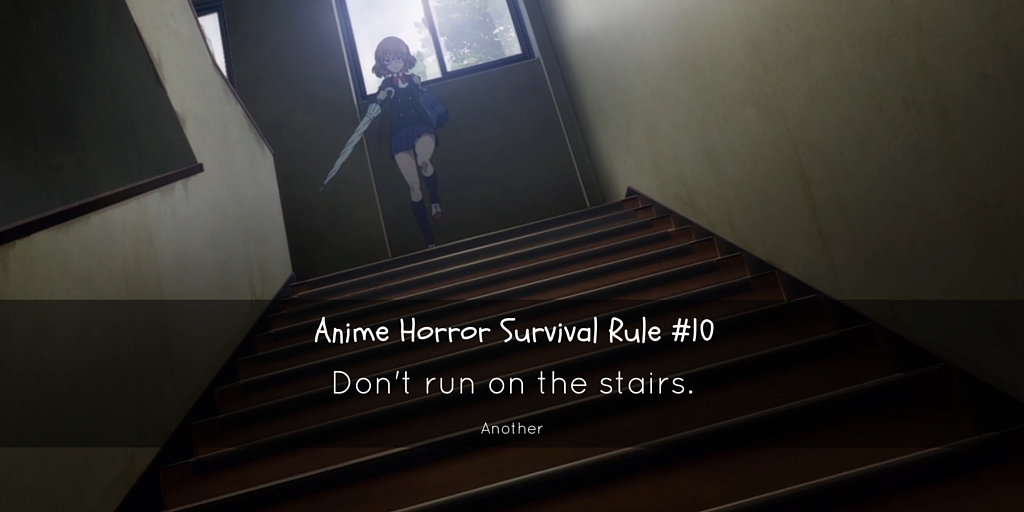 If you are in a horror anime, don’t run on stairs. It’s the universal horror trope: if you run (especially if you’re a girl), you will trip. In anime, with multi-level apartments and schools, there’s an even greater risk of tripping when you happen to be on the stairs. Seriously, “Don’t say we didn’t warn you about the stairs, bro!” 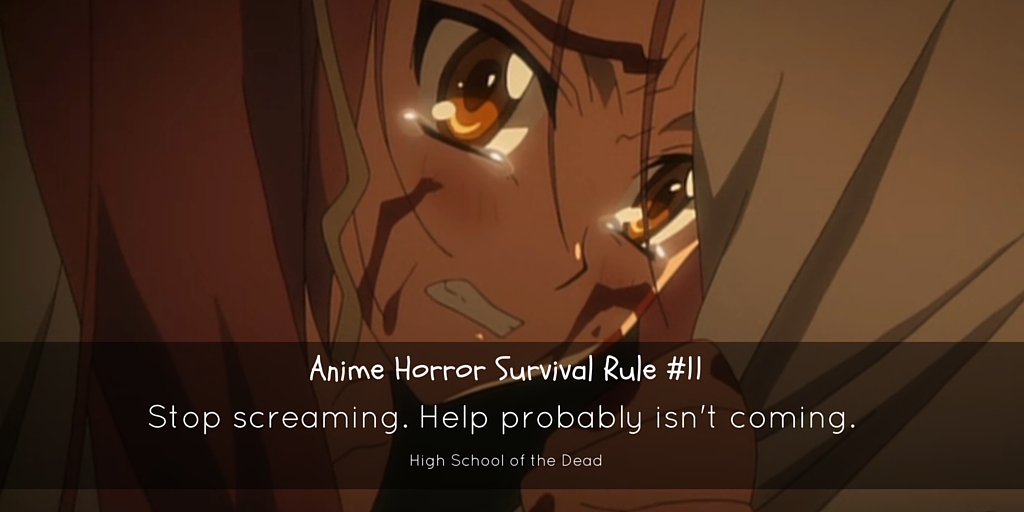 Screaming at the top of your lungs will not stop the zombie from from eating you, nor will it stop the yokai’s rampage. At best, screaming just wastes energy and gives away your location. 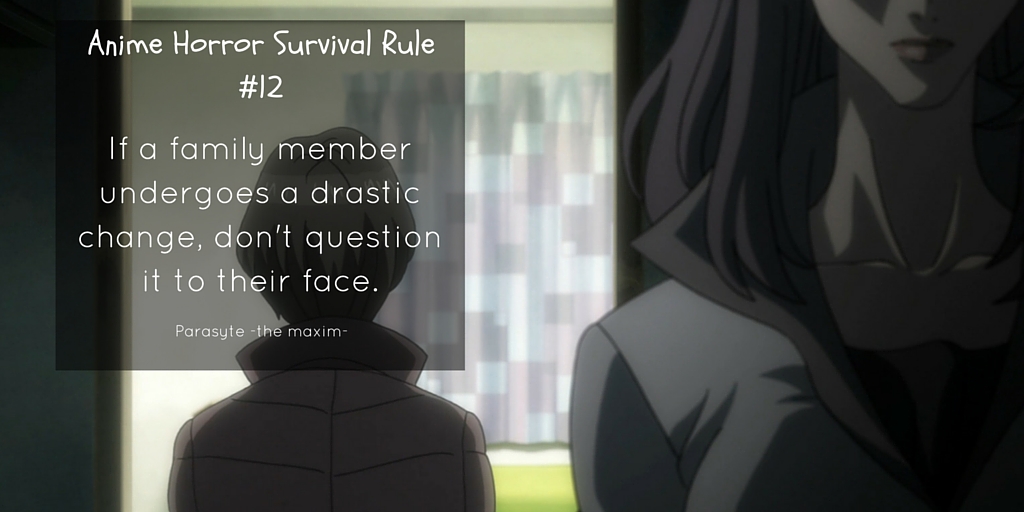 Nothing good can come out of a late-night talk with a family member who’s recently undergone a drastic personality change. If your sentence starts with a bewildered, “Who are you?! You’re not my…” you’re probably going to become a mess on the carpet. And the wall. And the window. 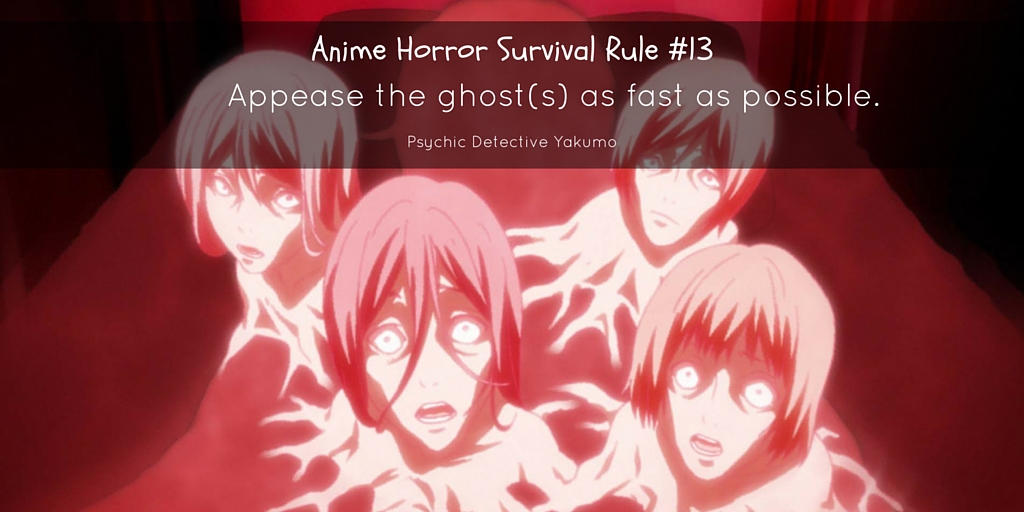 The longer a ghost’s restless and angry spirit stays on the mortal plane, the more damage it can inflict. Stop doubting the psychic, and just figure out what to do to get the ghost to go to the other side as soon as possible. 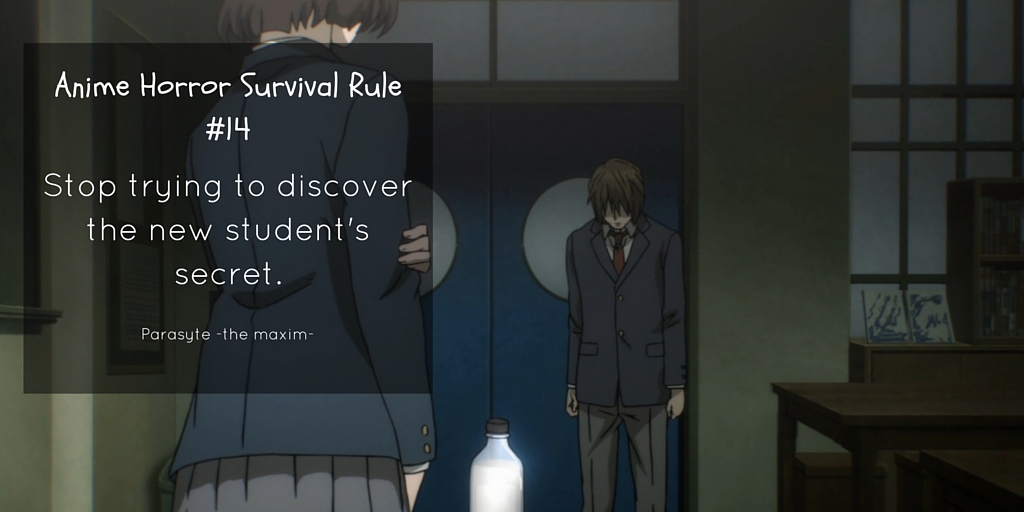 When the mysteriously attractive new student comes to class in a horror anime, it’s never a good idea to try to weasel their secrets out of them. If you’re a side character, pursuing this activity bodes even worse for you. Leave the new student ALONE. 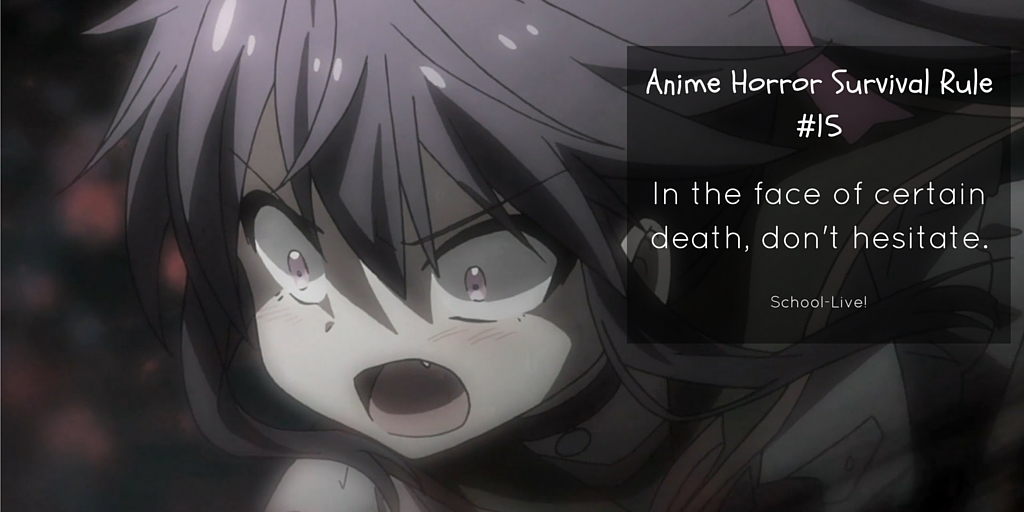 If you’re staring down the face of your demise, don’t hesitate. Either run or fight with full gusto. Your chances of surviving increase exponentially if you can act quickly, and even if you DO die in the process, at least you went out in blazing glory.

Knowledge is Power in Horror Anime!