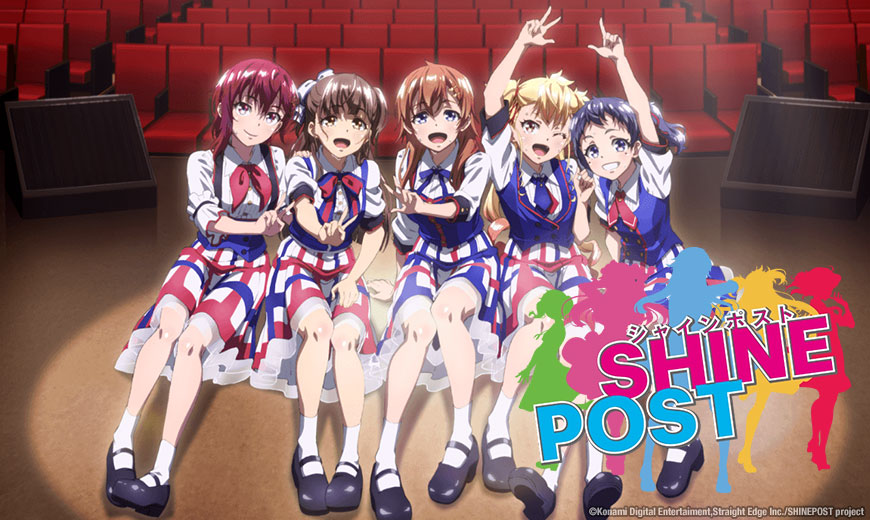 Sentai to Debut Anime Adaptation of “SHINEPOST” in Summer 2022

HOUSTON, TX — June 28, 2022 — Sentai announced today that it has acquired exclusive rights to SHINEPOST, the beautifully crafted anime series based upon the light novel of the same name by Rakuda, author of ORESUKI: Are you the only one who loves me? Sentai will stream the series exclusively on HIDIVE during the Summer 2022 simulcast season.

Although the idol group TiNgS is chasing after big dreams, so far their accomplishments have only been small — and now, suddenly, they're facing a potential break up! Hope seems lost, but when a new manager with a special skillset takes them under his wing, the members of TiNgS find themselves shooting for the stars all over again.

SHINEPOST is part of a multimedia project from Konami Digital Entertainment and Straight Edge that includes music videos, concerts, a mobile game, and manga and anime adaptations. Sentai will add SHINEPOST to its stunning lineup of fan-favorite idol shows, including BanG Dream!, Revue Starlight, Wake Up, Girls!, D4DJ First Mix and the mega-popular Utano Princesama franchise. The series’ music is produced by Yohei Kisara, who has been involved in and produced many hit anime series such as Love Live! (μ's) and Azure Lane.

SHINEPOST stars Sayumi Suzushiro (86, Kaguya-sama: Love Is War, High Score Girl) as Haru Nabatame and Yuko Natsuyoshi (To Your Eternity, The Misfit of Demon King Academy, Show by Rock!! Stars!!) as Rio Seibu. They are joined by Rika Nakagawa as Momiji Ito and Rimo Hasegawa as Yukine Gionji. Moeko Kanisawa, who will play the role of Kyoka Tamaki, will make her debut as a voice actress in SHINEPOST.

The series will premiere exclusively on HIDIVE in Summer 2022 with a home video release to follow.