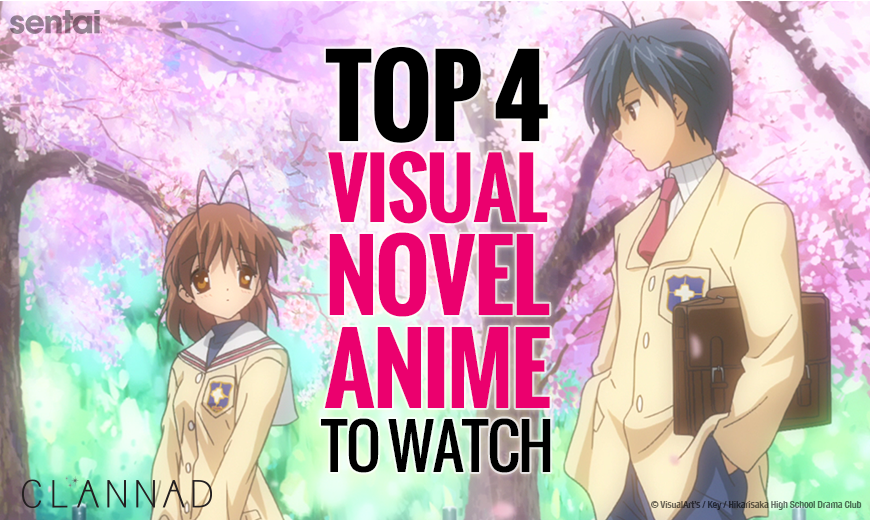 Anime draws inspiration from a wide variety of source materials, which includes visual novels. For the uninitiated, you can think of them as video games you read instead of play. As you might have surmised by now, visual novels overwhelmingly favor story and character development over action or button-mashing.

If you haven’t watched any visual novel anime adaptations, you’re missing out on shows that handle their characters and narrative in interesting ways. Today we’re looking at four different adaptations and what they bring to the table.

Amagami SS isn’t your average visual novel/dating sim adaptation. The basic premise and setting may feel like familiar territory, but that’s where any similarities to other romance anime end. Tell us, how many harem romances have you seen where the anime either picks the “female lead route” and sticks with that or has the main character friendzone everyone instead of choosing a significant other?

Amagami SS is different. Instead, the anime adaptation uses an omnibus format to make sure everyone gets equal screen time.

What do we mean by that? The main character, Junichi, has six potential love interests, and they each get a four-episode story arc where they get to know Junichi and fall in love. Whenever an arc concludes, the story starts over from the beginning, this time with a different girl as the female lead.

Instead of one, long 24-episode story, the viewer gets six bite-sized stories filled to the brim with character development and a resolution to the romance. If you’re still not satisfied, the appropriately named sequel, Amagami SS+, adds another two episodes to each story arc.

Clannad and the Power of Emotions

If you haven’t heard of Clannad, just know that it’s the reason the visual novel fans in your life spontaneously burst into tears from time to time.

On its surface, Clannad is your typical harem anime set in high school, but the tale quickly proves that it’s more than the sum of its parts. Clannad is a story of growth, love, loss, regrets, second chances and the connections we share with our fellow human beings.

Visual novels can afford to spend dozens of hours with world building and characterization, but anime is limited to what can fit into its episode count. Despite that, this particular visual novel anime found a way to capture the nuance and depth of its very human characters. There’s a reason why the series is so highly regarded: Clannad will break you — then fix you so you are whole again.

Chances are you’ve at the very least heard of the Fate series. It’s taken the world by storm with many installments and spin-offs, and it all started with the original visual novel, Fate/Stay Night, which was very unique. But there are thousands of visual novels out there, so what made this dark fantasy series stand out? It’s because the story could unfold in three radically different ways.

We’re not talking about a single storyline where the last chapter is different depending on which faction you supported throughout the game. We mean that when the story branches off, it splits into three routes that are all distinct from each other.

These three routes even have official names: Fate, Unlimited Blade Works, and Heaven’s Feel. (For the sake of convenience, we are excluding the many, many, MANY paths that lead to the dreaded “game over” screen.)

Although the show mentioned in this blog follows the Fate storyline, Unlimited Blade Works and Heaven’s Feel have their own anime adaptations. That should give you an idea just how different the routes are from each other.

When They Cry and Meta Narratives

It’s a good time to revisit When They Cry due to the new announcement about this series. Before we continue, we must stress that When They Cry is NOT for the faint of heart; it’s what happens when you cross anime with Groundhog Day and Saw.

Just when you think you’re getting a lighthearted slice-of-life tale set in a sleepy country town, the story shows its true colors as something straight out of a creepypasta. And, since you’re already emotionally invested, you quickly realize with dawning horror that it’s far too late to back out.

Both the visual novel and the anime break the story into “Question” and “Answer” arcs, which occupy two sides of the same coin. The anime uses this format to fantastic effect, creating a slow burn with a huge payoff. Although you watch as the story continuously spiral into madness during the first season’s “Question” arcs, the second season’s “Answer” arcs help explain why things happened the way they did.

Somewhere along the way, the viewer realizes there’s a greater meta narrative in play and something deeper is going on; that all the mayhem and brutality served a purpose and were actually critical plot points.

Interested in More Visual Novel Anime? Check Out Our Catalog!

Visual novel adaptations have the benefit of drawing from a wealth of source material, as the above anime show. Each one brings something unique to the table, whether it’s a different story format or unparalleled character development.

Naturally, we have more visual novel adaptations than just what’s written in this blog; we have more waiting for you in our catalog. We invite you to browse so you can find your new favorite show. And remember: don’t forget to sign up for our newsletter so you can be the first to know about all things Sentai!