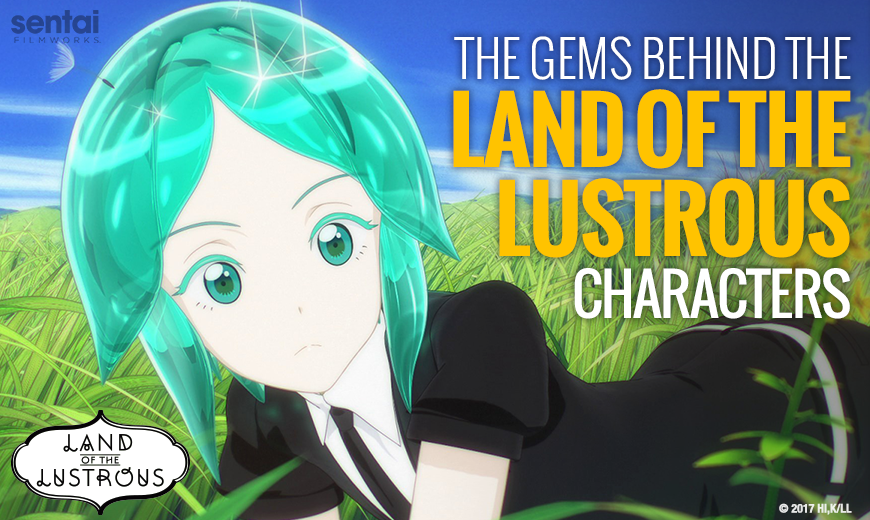 The Gems Behind the Land of the Lustrous Characters

Some people may consider anime a shallow medium. “They’re only cartoons, right?” these people might say. “They’re fun to watch and follow, but at the end of the day, that’s all there is to them.”

People who assume this simply couldn’t be more wrong — especially if they’re talking about Land of the Lustrous.

Like many of our favorite titles, the Land of the Lustrous anime is more than just an interesting and aesthetically brilliant story. If you pay attention, there are multiple layers to peel and hidden secrets to unravel in the glittering, sentient Gems who populate this series’ mysterious world.

You’ve probably noticed that all of the Gems are based on real minerals, but their association with their namesakes goes far beyond their rating on the Mohs scale of mineral hardness. Certain aspects of the gems’ properties and structures have influenced the traits, appearances and personalities of the character Gems, and all it takes is a little research to find a fascinating new layer hidden underneath the obvious.

Sound interesting? We certainly think so, and if you do, too, join us for a look at the subtle science and hidden meanings behind the gems that make up Phosphophyllite and other Land of the Lustrous characters.

Bort’s Strength Is No Coincidence… 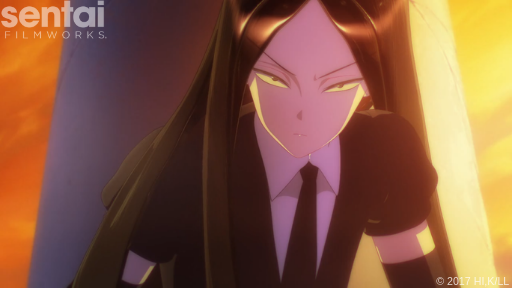 Bort is the Gems’ most capable fighter, slicing and dicing the Lunarians with dexterity and ease. In real life, bort (or boart) is made up of shards of non-gem-grade diamonds. These shards are used primarily in construction work and industrial tools; chunks of bort are often used in drill tips, while the most microscopic bort samples appear in industrial lubricants and abrasives.

Like all diamonds, Bort’s body possesses a rank of 10 on the Mohs scale of mineral hardness. This indicates they are made up of the hardest gemstone around, and this reflects the character Bort’s rough-and-tumble nature, blunt attitude and all-around toughness.

Apart from their fighting prowess, the significance of Bort’s namesake gemstone is most obvious in (believe it or not) their hair! Bort is made up of many small diamond particles, and Bort’s many tails of hair might be a nod to this aspect of their structural makeup.

Furthermore, the mineral bort has no gemstone cleavage whatsoever. Gemstone cleavage indicates how cleanly a gem can be cut or broken along a certain axis. In the world of gem cutting, possessing zero cleavage means a gem will break in rough and irregular patterns when it’s cut — much the same way Bort’s hair gains a rough and irregular edge when it’s doused by acid in an early episode of the Land of the Lustrous anime. Talk about attention to detail!

… and Diamond’s Brilliance Is Undeniable 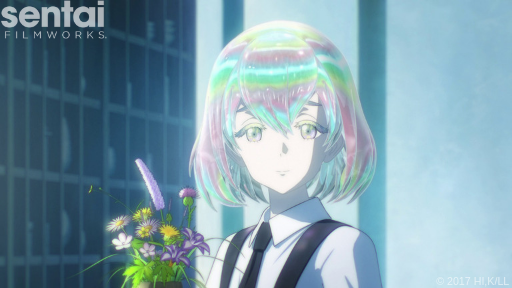 If you want two gems with the same crystalline structure who still manage to be polar opposites, look no further than Bort and their partner, Diamond, who occupy opposite sides of the diamond coin. Where Bort is discolored, dark and not suitable for use in jewelry, Dia is a gem-grade diamond of perfect clarity. Where Bort is serious and prickly, Diamond is bubbly and gentle. The pair’s visual differences detail their contrasting personalities before they even start speaking.

Furthermore, while bort is the most common kind of diamond mined in the world today, gem-grade diamonds that can be used in jewelry are comparatively much rarer, comprising only 20% of the world’s diamond market. Colorless diamonds are the rarest of all, prized for their extreme brilliance and vivid fire.

“Fire” in gemstone terms refers to a gem’s ability to refract light in rainbow hues. The better the diamond, the more vivid and sparkly the “fire.” A single glance at the rainbow-tinted Dia shows how much fire they produce, indicating that unlike the discolored Bort, they are formed from quality crystal, indeed.

Diamond is so high quality, they manage to produce “fire” even at night! *insert fire emoji here* 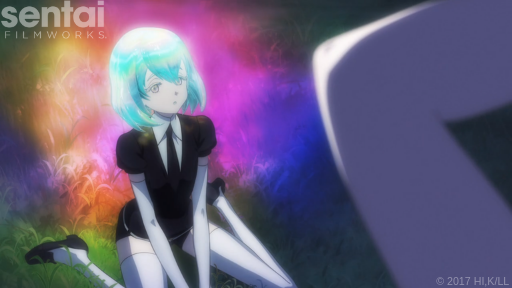 Diamond is truly one of the most beautiful of all the gems, and it’s no surprise the Lunarians desire to capture Diamond and take them to the moon to serve as decoration. 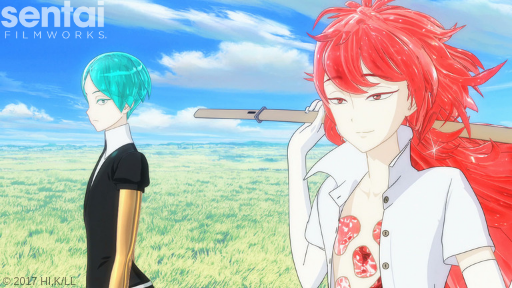 Padparadscha is one of the oldest Gems. Their body possesses natural holes throughout the torso, and these gaps in their physical form render Padparadscha comatose most of the time. When they wake, they’re a wise and cheerful gem with unmistakable charisma, counseling Phos as they begin to question their role on the Gems’ island.

In our world, the gemstone padparadscha is actually a variety of sapphire that bears an unusual orange-pink hue. This gem is extremely rare and even more precious than high-quality blue sapphires… but this only makes sense when you consider how difficult it is for Rutile and the other gems to find material to fill in the gaps in Padparadscha’s torso. 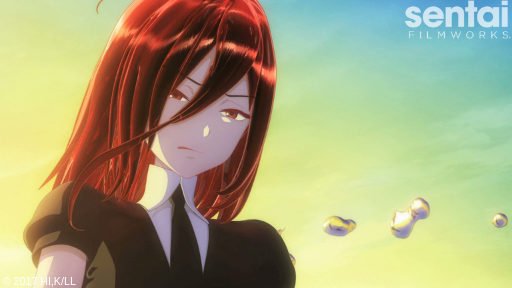 Cinnabar lives in self-imposed exile. They wander the shore keeping watch for the Lunarians under the light of the moon, knowing that their job is a futile one since Lunarians only come out during the day. But even though they find no joy in their solitary occupation, it’s the only job they feel they can have — not for their sake, but for the sakes of their fellow Gems.

Cinnabar’s body secretes a deadly poison, and none of the other Gems are immune.

Although the name of this poison isn’t given over the course of the Land of the Lustrous anime, Cinnabar’s namesake gem indicates that it is most likely elemental mercury. Cinnabar’s poison looks like liquid silver, after all, and the mineral cinnabar is the world’s primary source of poisonous quicksilver.

But cinnabar isn’t just a poisonous gem. From cinnabar comes dyes like vermillion, used throughout history to color clothing, cosmetics and other objects a brilliant red. You risk lead poisoning by wearing these objects, of course, but cinnabar is not without its own kind of beauty (beauty is pain… right?).

And that’s saying nothing of mercury’s other practical uses. Some thermometers, mercury switches and relays, float valves and fluorescent lights all make use of mercury. That means mercury — and the cinnabar from which it’s extracted by extension — is extremely useful.

In fact, cinnabar is probably the single most useful mineral on this entire list, at least as far as humans are concerned. Now if only Cinnabar believed that about themselves…

The Amethyst Twins have Perfect Nicknames 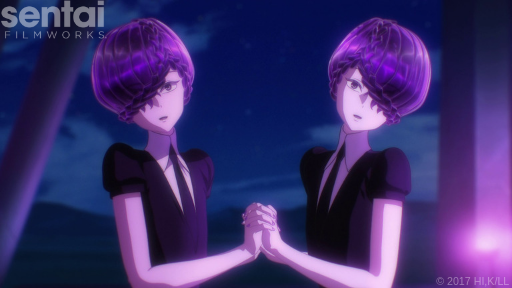 You might recall that the twin amethyst Gems refer to each other by a set of rather unusual nicknames. They call themselves “Eighty-four” and “Thirty-three,” but where the heck did these nicknames come from?

It turns out their nicknames come from the concept of gem twinning! Gem twinning is what happens when separate gemstones share certain crystal lattice points, resulting in the intergrowth of crystals. Twinning can manifest in a variety of configurations, and the names “Eighty-four” and “Thirty-three” specifically refer to “Japan Law twinning.”

Japan Law twinning is a form of contact twinning in which two identical crystals are conjoined but grow as two visually distinct gem structures. These two crystals meet at a specific angle, too — namely the angle of 84°33'! Suddenly the nicknames of the amethyst twins (and the fact that they’re twins in the first place) make perfect sense.

Obsidian Is the Only Choice for Weapons Master 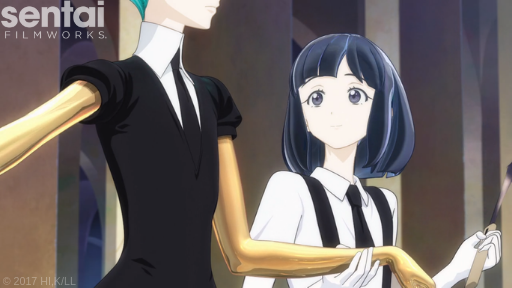 Obsidian is in charge of Phosphophyllite and the other Gems’ weapons, and with good reason. Their namesake mineral forms when lava rapidly cools into beautiful glass, and when fractured, obsidian forms extremely sharp edges. It’s no wonder obsidian has been used throughout history by various cultures to craft deadly sharp weapons and tools.

In fact, obsidian blades are much sharper and smoother than conventional steel blades, and this difference is most obvious when the blades are viewed under a microscope. The edges of some obsidian blades are only a single molecule wide! Among all the Land of the Lustrous characters, Obsidian was clearly the perfect fit for the Gems’ weapons master.

Alexandrite, the Gem of Change 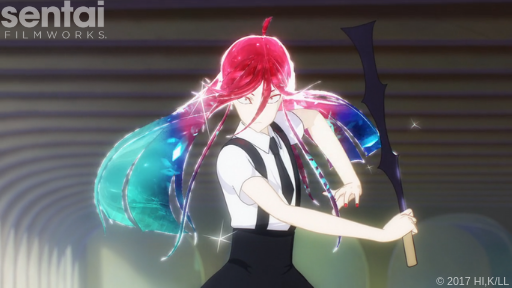 Alexandrite is a researcher obsessed with learning everything they can about the mysterious Lunarians, and they spend their days cloistered in the Gems’ school poring over texts. Despite their long green hair, Alex blends into the background alongside other Land of the Lustrous characters.

Except when they don’t, of course.

Sometimes the sight of a Lunarian will trigger Alexandrite’s rage, and their hair will turn brilliant red. Their resulting rampage is capable of destroying multiple Lunarians with a single swipe of a sword before they collapse as their hair fades back to green.

It’s tempting to write this color-change off as anime dramatics. After all, red hair is generally reserved for fiery characters with hot tempers; the animators might have wanted to highlight Alex’s change in demeanor with a change in hair color to drive home the point that they had undergone a psychological shift, right?

In truth, Alex’s change was inspired by the real gemstone alexandrite, which is a variety of chrysoberyl (and Chrysoberyl is the name of Alex’s former partner, for the record, who was stolen by the Lunarians). Real-world alexandrite can change its color depending on its light source, shifting from green to reddish before our eyes.

Luckily the real gem doesn’t need to come into contact with creepy visitors from the moon to change colors, though.

Phosphophyllite, Rarest of Them All 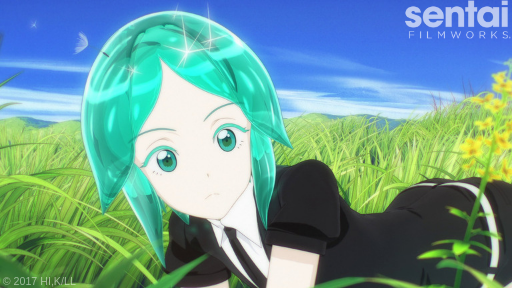 Clearly we’ve saved the best for last. Even if you’re a huge fan of Land of the Lustrous’ Phos, you might not have heard of their namesake gemstone, phosphophyllite — and with good reason. It turns out phosphophyllite is known as one of the “holy grails” of mineral collecting, as it’s as incredibly rare as it is beautiful.

In fact, this gemstone is so rare and valuable that lapidarists and other artisans often refuse to cut large samples of phosphophyllite for fear of breaking the soft crystal… which is quite ironic when you consider how often Land of the Lustrous’ Phos winds up broken and reshaped over the course of the series.

Phos’ identity is even more fitting when you dig into the roots of the word “phosphophyllite.” The gem’s name comes from the Greek word for “leaf,” referring to phosphophyllite’s perfect, leaf-shaped cleavage and pale green color… but when you take into account how much Phos grows and changes over the course of the series, like the leaves changing colors with the season, Phos’ namesake becomes all the more perfect for them. 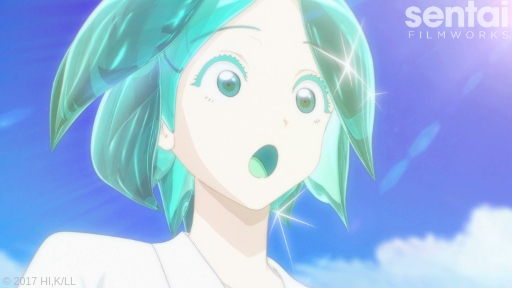 We’ve no doubt only scraped the surface of the various meanings lying between the layers of Land of the Lustrous, but that’s not surprising. This show contains a depth of symbolism and precision of thematic intention all its own, and we’ll be excavating more layers for a long, long time. It just goes to show that anime is a medium capable of the same nuance as literature and western film, and that you need only dig a little deeper to find the meanings lurking just out of sight beneath the surface.

So the next time someone tries to tell you that anime is pure entertainment and nothing more?

All you need to do is point them toward the hidden meaning and subtle science of Land of the Lustrous’ characters, and we’re sure they’ll change their tune.

And you’re in luck! The Land of the Lustrous blu-ray just dropped, so pick up yours (and maybe pick one up for a skeptical friend) while you’ve got the chance.

Did you know most of the above factoids? Have a few more to share? Tell us what we missed and what your favorite factoids are using the social media buttons below, and don’t forget to tag us @SentaiFilmworks! Be sure to follow our newsletter, too!