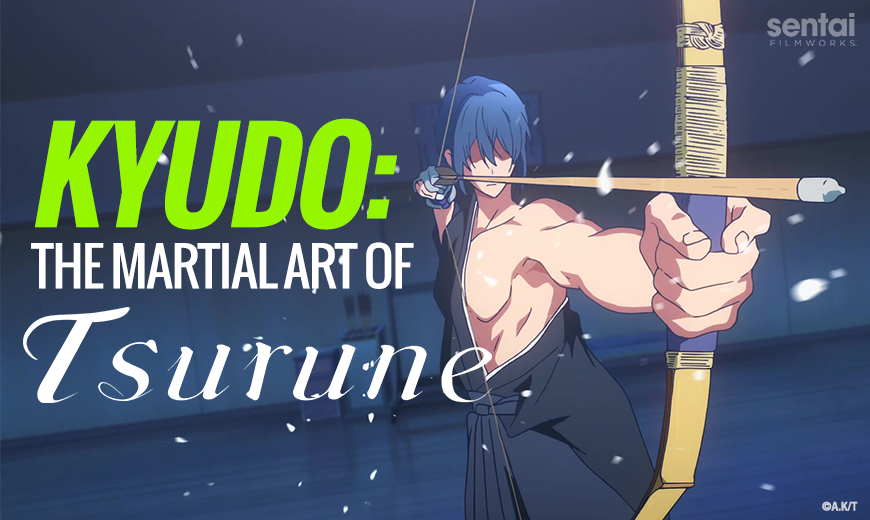 Kyudo: The Martial Art of the “Tsurune” Anime

There’s nothing quite like watching a scrappy team of underdogs claw their way to the top against impossible odds — especially when the anime features a fascinating sport like kyudo, an ancient Japanese martial art you might not be familiar with.

Even if you’re not a sports fan, you won’t want to miss out on Tsurune. This series is gorgeous to behold and deeply touching, featuring endearing characters who grapple with universal struggles. If you’re curious about what an archery anime entails and how it relates to the drama of Tsurune, read on to learn more about the martial art of kyudo and why it makes the anime so special. 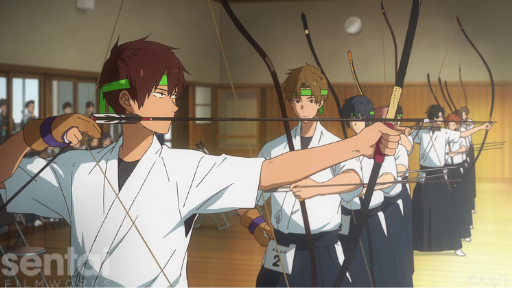 Kyudo — which translates to “the way of the bow” — is the martial art of traditional Japanese archery. Although originally intended as a mechanic of war, today kyudo is practiced to promote spiritual, physical and moral development, emphasizing the concepts of etiquette, respect, and dignity. Kyudo is a physical philosophy, one devoted to the pursuit of truth, goodness, and beauty.

Practicing kyudo isn’t only about hitting the center of a target during a competition. Kyudo is about existing in harmony with yourself, your bow, and your target. These themes run through the core of Tsurune, which chronicles the journey of a young man coming to grips with grief and loss through the art of kyudo.

When was Kyudo Invented? 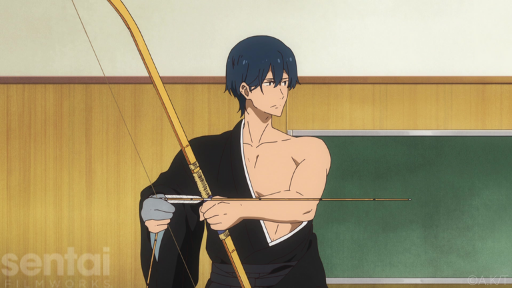 Although there are depictions of Japanese archery that predate history, the asymmetrical Japanese longbow (“yumi”) used in kyudo originated during the Yayoi period (c. 500 BC – 300 AD). Over time, samurai and other military powers refined kyudo during periods of war. However, the art declined once the Portuguese introduced firearms to Japan in 1543. From the peaceful Edo Period onward, kyudo developed into the samurais’ ceremonial pastime and as competitions that soon spread outside of Japan’s high-caste warrior class.

When samurai lost their class status in the Meiji era (1868-1912), every martial art form saw a loss of practitioners and appreciation — but in 1896, a gathering of kyudo masters came together to revive the art of kyudo by merging the ceremonial and warlike aspects of the martial art. In 1949, the All Nippon Kyudo Federation was founded to unify the sport’s practitioners. The rules of modern kyudo were formalized in 1953.

Who Can Practice Kyudo? 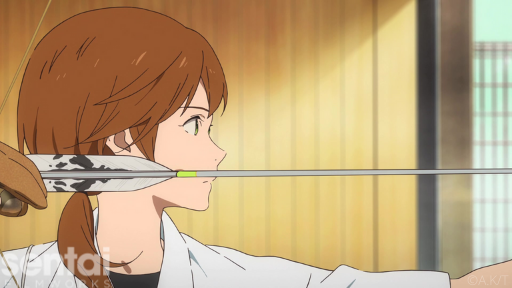 Anyone can practice kyudo! Although kyudo as we know it originated in feudal Japan, people from all walks of life practice it today, and the International Kyudo Federation boasts thousands of members in many different countries around the world.

Since kyudo doesn’t depend on excessive strength or stamina, anyone can practice the martial art and appreciate its intrinsic beauty. In fact, they even teach kyudo in Japanese schools! The martial art is not usually offered until high school, but students are free to join their school’s kyudo club and participate in competitions — just like Minato does over the course of the Tsurune anime.

How Do You Practice Kyudo? 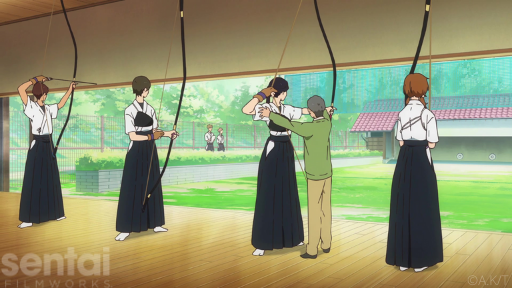 People typically practice kyudo in a kyudojo, or a special kyudo practice hall, which comprises a large, open-front building (“shajo”) that faces an enclosure holding a target bank (“azuchi”). The hall and the targets are separated by an expanse of lawn or raked sand called a “yamichi.” However, any place large enough to raise a bow and install a target can be called a kyudojo. 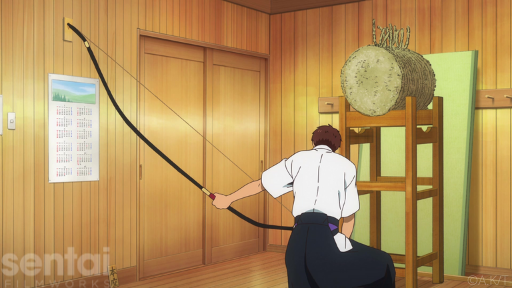 One of the most important pieces of kyudo equipment is the bow, or “yumi.” Modern versions of these large, asymmetrical bows are made of resin and synthetic materials, but some people use bows made of natural materials. No matter which material is used, proper care and respect for one’s bow is an essential aspect of kyudo.

The string of a bow is called the “tsuru” — and yes, Tsurune is indeed named after this piece of kyudo equipment! The word “tsurune” literally refers to the zippy, electrifying sound a bowstring makes when it is released by an archer. 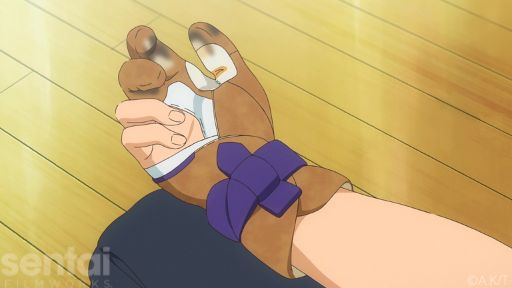 The yugake, or kyudo glove, is another important piece of equipment to a kyudo practitioner. Kyudo gloves come in three different varieties (three-finger, four-finger, or five-finger) and are difficult to use without proper instruction. They protect the user from harm when firing the bow and can last for many years, making it even more important to treat your glove with care.

The cool thing about all this equipment? It has remained unchanged for hundreds of years, which means you’re literally wearing history! 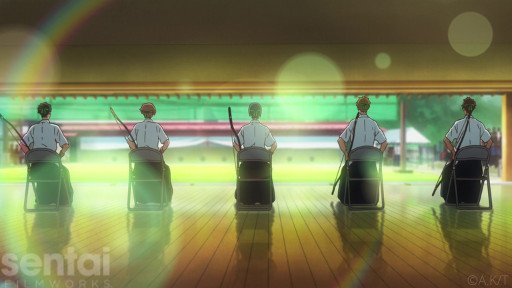 But aside from equipment? The single most important aspect of kyudo is the meticulous technique of the sport itself, referred to as the Eight Stages of Shooting. From the placement of an archer’s foot to the lowering of the bow after taking a shot, each and every motion an archer makes is outlined in the Eight Stages. The stages outline a cycle of motions that flow into one another in a loop, creating an aesthetically beautiful action that is as much a product of practice as it is an act of meditation.

Since there are several different kyudo schools, the exact stages can vary somewhat. Some practitioners prioritize targeting accuracy over shooting form, while others refrain from entering competitions to focus on the self-improvement aspect of kyudo. Competitive kyudo possesses even more steps and prescribed motions than the non-competitive variety. During a competition, a kyudo team enters the dojo with a great deal of ceremony, kneeling and bowing in a particular order to convey respect for the martial art before trying to score the most points on a target. Talk about a tough sport to master!

Why Kyudo? Why an Archery Anime? 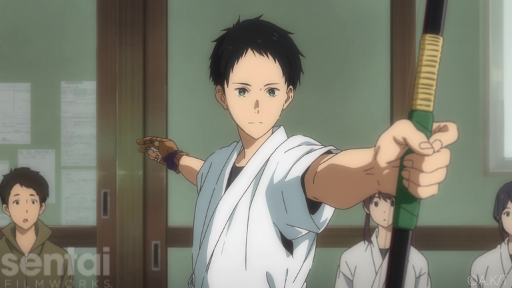 If you’re more familiar with sports like baseball and basketball, you might wonder if an anime about archery is right for you. We’re here to tell you that the Tsurune anime uses kyudo to craft a compelling, heartfelt story about loss and self-reliance that is absolutely universal.

Furthermore, kyudo plays an integral role in how we learn about and relate to the characters in Tsurune. The inclusion of the martial art isn’t inserted for mere background fluff, but rather because it reveals the internal workings of the anime’s main characters. Kyudo as a martial art demands self-reflection and razor-sharp focus, bringing Minato’s feelings to the surface with every shot he fires. Kyudo itself is a fascinating subject, but what it brings to light in its practitioners is just as fascinating — if not even more fascinating — than this ancient art.

Want to Learn More About Kyudo? Check Out Tsurune on Home-Video! 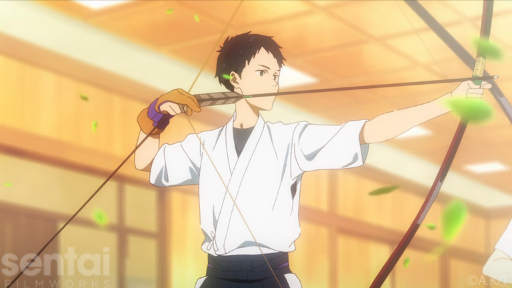 With complex characters and a sport as magnetic as kyudo at its core, it’s no wonder the archery anime Tsurune tells a gripping, subtle story about pulse-pounding competition and learning to trust yourself after suffering a devastating loss. Needless to say, the equipment, rules and principles of kyudo described above are only the tip of the iceberg. If you’d like to learn more about this sport or see (and hear!) the sport in action, be sure to check out Tsurune on Blu-Ray, or pick up a copy of the Premium Box Set for more of our favorite archery team.

Enjoy this deep dive into the archery of Tsurune? Want to tell us more about this amazing martial art? Tell us what you think by tagging @SentaiFilmworks on social — and don’t forget to sign up for our newsletter, too!