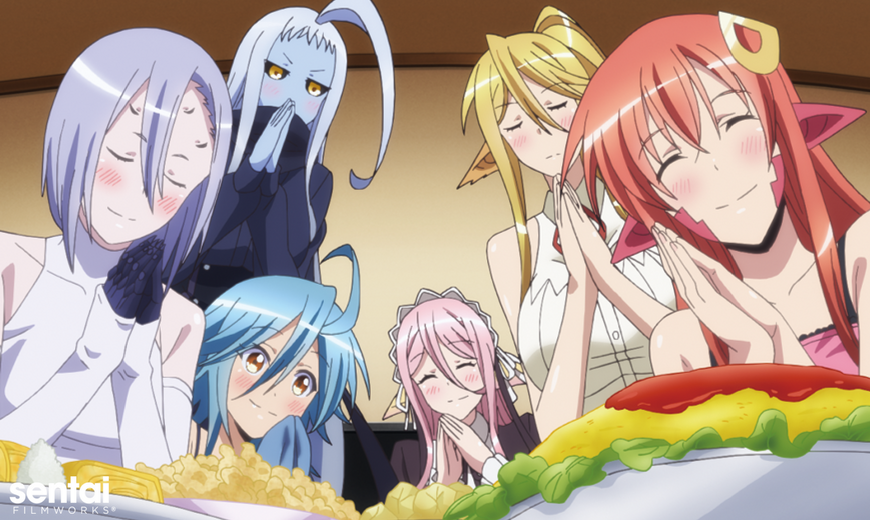 This July is going to be HOT for more reasons than one! Seriously: this July 2017, Sentai Filmworks will be releasing Monster Musume: Everyday Life with Monster Girls and GATE as premium box sets!

Also coming out this summer, the complete collection of Time Jam: Valerian & Laureline, the animated adventure based on the same source material that inspired the upcoming Hollywood blockbuster: Valerian and the City of a Thousand Planets.

Which titles are you most excited for?

SYNOPSIS: The fight against Leader X was finally over, but a small portion of his evil remained and regenerated into Leader Z! Now, with the aid of the monstrous Count Egobossler, the Gatchaman team's arch-foe is out to destroy the world again, and even though their ranks have been decimated, the Gatchaman force has no choice but to keep fighting. To combat their new foes, they'll need new weapons and new allies, but their mission remains the same: protect the Earth and Mankind, no matter the cost. And that cost may prove to be the ultimate one when the new Gatchafencer blade wielded by Ken turns out to be a double-edged sword. Find out who will live, who will die, and who will triumph as Japan's most famous sci-fi fighter team takes on their greatest challenge in GATCHAMAN FIGHTER!

SYNOPSIS: When a mysterious gate suddenly appears in Tokyo's Ginza district and begins spewing armed warriors and flying monsters, the world is thrown into turmoil. Although the deadly attack is thrown back by Japan's Self Defense Force, there's now a new and entirely unknown land on the other side of the portal, and Japan is effectively at war with a nation on the other side. Determined to secure peace, the JSDF must send an armed force into the Gate, but ogres, dragons and a ruthless Empire populated by elves, humans, and half-animal warriors aren't the only dangers they'll face. With the resources of two worlds at stake, the balance of power on both sides of the Gate is destabilizing, and betrayal can come at any time, from any quarter. There, trapped right in the middle of the ensuing firestorm, stands officer Yoji Itami and the JSDF's Third Reconnaissance Team as they plunge into the GATE.

SYNOPSIS: The first rule of time travel is to never change anything. Otherwise, the resulting “butterfly effects” can ripple through time and wreak untold havoc on the unwritten future. But on his last test as a Space Time Agent, Valerian messes up. Not only does he save someone who would have been killed, but he’d have died himself if Laureline hadn’t rescued him! As a result, nothing in the future is where he left it, including the Earth! Now he and Laureline, his accidental passenger from 10th century France, have to put the universe back in order without writing themselves out of existence! Across a million worlds and an infinite number of possibilities, it’s the ultimate adventure in time and space as the multi-verse from the groundbreaking graphic novels by Pierre Christin and THE FIFTH ELEMENT designer Jean-Claude Mézières becomes the stage for TIME JAM: VALERIAN & LAURELINE!

SYNOPSIS: No one expected the government to suddenly acknowledge the existence of demi-human species like harpies and centaurs, but when a careless Integration Agent shows up on Kimihito Kurusu's doorstep with an attractive Lamia in tow, he suddenly finds himself designated as a "Host Family". This might not be so bad, except that while Miia's top half is all girl and quickly develops a crush on her new human host, her snakelike bottom half makes that crush literal with a tendency to squeeze the life out of him! Plus, there's also the little problem that it's illegal for humans and non-humans to have THOSE kinds of relationships. With woman-in-black Agent Smith always sniffing about for improprieties, things only get more hectic in the Kurusu household when bird-brained Papi the harpy and master-seeking centaur Centorea need places to roost and stable. As the house gets crowded with even more captivating cuties, can any human male survive under such tempestuous and tempting conditions? Find out in MONSTER MUSUME: EVERYDAY LIFE WITH MONSTER GIRLS!

SYNOPSIS: Black cats might be bad luck, but did you ever think that the cat might have a reason for causing trouble? Rinne Rokudo quickly finds out that it's more than possible, especially when the "cat" is the mostly humanoid Oboro who's stuck in a contract with spoiled Shinigami Ageha… so now Rinne's derelict house is suddenly filled with snake spirits! That's just the slinky start of the latest set of missions for perennially broke half-human, half-Shinigami exorcist Rinne; his contracted black cat/demon Rokumon; and Rinne's human classmate, partner in paranormal activities, and possible paramour Sakura "I see dead people" Mamiya. From ghostly class reunions to a flu so bad that you get it AFTER you die, the only thing you can be sure to expect is the unexpected in the second season of Rumiko Takahashi's RIN-NE!