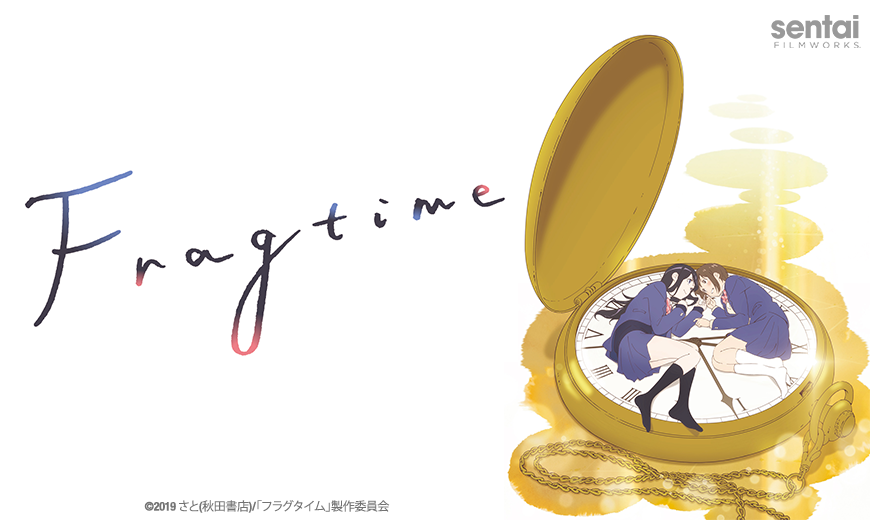 Shy Misuzu Moritani is a totally average girl — except for her totally insane ability to stop time for three minutes a day! She uses her power to observe her classmates without fear of being noticed in return. But her secret doesn’t stay that way for long. Misuzu learns her power has no effect on her school’s idol, Haruka Murakami, when she’s caught sneaking a peek under her skirt. Against all odds, a relationship blossoms from this compromising situation, one as poignant and as fleeting as the three minutes Misuzu spends each day in frozen time.

Fragtime is produced by tear-studio (Why the hell are you here, Teacher!?, The Royal Tutor Movie, Lord of Vermilion: The Crimson King) with music from Rionos (Kase-san and Morning Glories, Maquia: When the Promised Flower Blooms, Children of the Whales); Takuya Satou (Strawberry Marshmallow, Girls Beyond the Wasteland, STEINS;GATE) will direct and pen the film’s script. Miku Ito (BanG Dream! S2, RE-KAN!, How clumsy you are, Miss Ueno.), Yume Miyamoto (Kids on the Slope, Mushishi, Ghost Hunt) and Chika Anzai (Chihayafuru, Scum's Wish, KOKKOKU) star as Misuzu Moritani, Haruka Murakami and Yukari Kobayashi, respectively.
The feature’s North American premiere will be held at Anime NYC on Saturday, November 16, in room 1E13 at 1:30 PM EST, where guests will hear exclusive behind-the-scenes stories from Fragtime producer Yusuke Terada and principle seiyuu Miku Ito. For more information, visit: http://animenyc.com/screenings2019/

About Sentai Filmworks, LLC
A Cool Japan Fund portfolio company, Sentai Filmworks is a leading global supplier of anime and official anime merchandise, distributing, and curating one of the industry’s most diverse libraries of top trending and classic titles. Sentai offers thousands of hours of content across both traditional and digital platforms and is dedicated to bringing captivating stories and iconic characters directly from Japan. With hit series that include MADE IN ABYSS, Land of the Lustrous, MONSTER MUSUME Everyday Life with Monster Girls and Parasyte -the maxim-, Sentai’s catalog continues to grow with new favorites like Bloom Into You, Revue Starlight and DEVILS’ LINE, as well as classic anime series such as Legend of the Galactic Heroes and The Big O. For more information, visit www.sentaifilmworks.com.