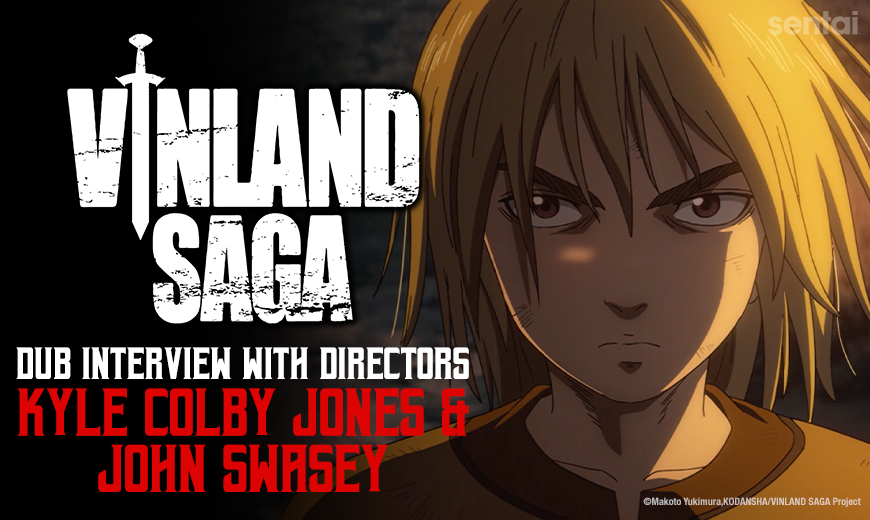 The Vinland Saga dub is here at long last, and to say that anime fans were anticipating its release feels like a vast understatement. To celebrate this momentous release, Sentai has a special treat for all you dub fans out there: We interviewed Vinland Saga dub directors Kyle Colby Jones and John Swasey after we ambushed them in the lunchroom asked if they could take the time out of their busy schedules to answer a few questions about their latest work.

How much did you know about Vinland Saga before directing it?

Kyle Colby Jones: Just what I learned from watching it in Japanese. That said, I knew a bit about Leif Erickson, but not enough to pass any sort of written exam.

John Swasey: I actually knew nothing about it originally. But ever since I watched the show VIKINGS I thought that there should be an anime about vikings. Then BOOM!

Kyle Colby Jones: It was a blast. Also, it was a chance to work alongside John Swasey. We co-directed this one because of the huge scope of the project. Mike Haimoto also did some directing for us. The massive crowds of vikings and other ruffians could have made it a daunting task. But, surrounding yourself with amazing people makes everything more fun.

John Swasey: Ditto on Kyle. But I will add that it really was a team effort across the company. Lots of enthusiasm which was great.

What casting considerations did you specifically have for the leading characters like Thorfinn and Askeladd?

Kyle Colby Jones: Both John and I knew immediately that Askeladd was going to be David Wald. He has that perfect temperament to be an outright bastard but still likeable. Thorfinn needed multiple actors to cover the age range. We boiled it down to two folks who could handle it. Shannon Emerick as the young, and Mike Haimoto as the not-so-young.

John Swasey: As Kyle and I had meetings over the phone we would discuss different actors for each character. We were almost reading each other's minds. It was very simpatico.

Was there anything you had to keep in mind while working on the dub?

Kyle Colby Jones: Accents and dialects. Each horde comprises a number of people from all over Europe and Scandinavia. While we keep Iceland and Denmark as basic English, we got the chance to play around with the other regions.

John Swasey: Keeping the realism for me was super important and not going too cartoony. But we had the right cast who def brought their A game so that was not a problem. Accents were another factor.

What was the most challenging aspect of directing the dub?

Kyle Colby Jones: Again, the size of the production. So many characters, masses of walla, and a well-told intricate story to keep track of.

John Swasey: The size of the project. There were 350 walla cues alone. Not to mention the one liners galore. It took a village.

Was there anything from your previous directing experience that became relevant or otherwise helped while dubbing this series?

Kyle Colby Jones: Every project ever. Each show I work on offers new insights. Log Horizon and Haikyuu!! helped me handle huge casts. Princess Principal taught me about accents. (And which actors can do accents.)

John Swasey: Recently Babylon and Hero Mask were of huge importance to me because they are so realistic. I wanted that same feeling here.

Who is your favorite character and why?

Kyle Colby Jones: Askeladd. He has an amazing story arc. He is great at what he does. A master manipulator and scoundrel, as well as a total badass. And, sometimes a father-figure and confidant. Alas, he’s not sure if he wants to do it anymore.

John Swasey: Kyle’s answer is mine too. David was amazing as Askeladd.

How long did it take to dub this series from start to finish?

John Swasey: About 3 months beginning with pre production and dubbing then post.

Kyle Colby Jones: Not really. In fact, I usually record a 24-episode season in two 12-ep batches. Back in the ancient olden times shows were released in volumes, so we recorded in groups of 3-4 episodes. Personally, I prefer the smaller approach. It allows me to keep the production more focussed. Plus, my brain can only handle too much.

John Swasey: No. Once we got through the first half we were in a groove. So it was just a continuation. I prefer this method because you get to see the arcs play out.

Vinland Saga draws from historical records as well as fiction. Some characters like Thorfinn and Leif Erikson were based on their real-life counterparts whereas other characters were made up. What considerations did you have when working on a show that blends historical accounts and fiction?

Kyle Colby Jones: Just to make sure they all got the same love. I did some Google University to check out some of the characters, but nothing too exhaustive.

John Swasey: I had studied Norse mythology in college so I was pretty familiar.  And of course I watched VIKINGS. We did have a debate on pronunciation with Leif. I thought it was “Lafe” but gave into Kyle’s “Leaf.” I ultimately won out when he realized it was indeed “Lafe” from everyone else he talked to. WIN!

The Vinland Saga Dub Can Be Yours Right Now!

Are you more excited about the dub now that Kyle Colby Jones and John Swasey answered those questions? Then head on over to the Sentai shop and grab your copy today! There’s nothing like owning a permanent copy that’s yours to keep forever.